Sorry I haven't been around much over the weekend.  Our internet has not been playing ball.  I could visit sites but when it came to leaving comments or uploading any pictures, or writing a post our bandwidth was so low it was not playing ball.  Mr Hubster spent a few happy hours on the phone to India trying to explain that just because we have a working phone line, as it is raining our internet is not good!  Grrr.

Anyhoo I am back in the land of civilisation so I can share a post which I had previously uploaded (when the weather was sunny) for you.

I was going to my friend's house with my paints and Sheena Douglass stamps for a painting day and realised I had no tin or box or suchlike to transport my paintbrushes in safely.  So I set to and made this... 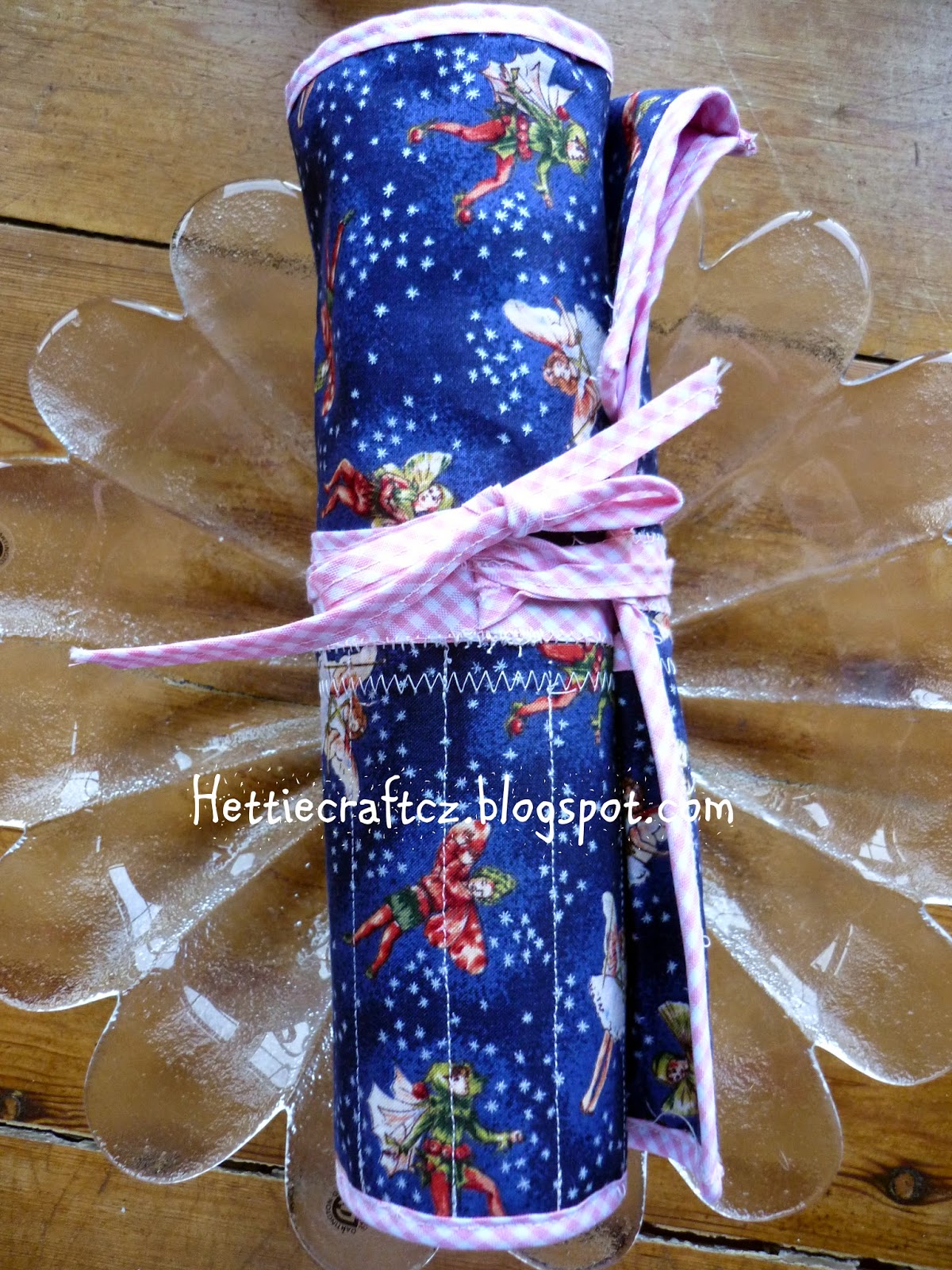 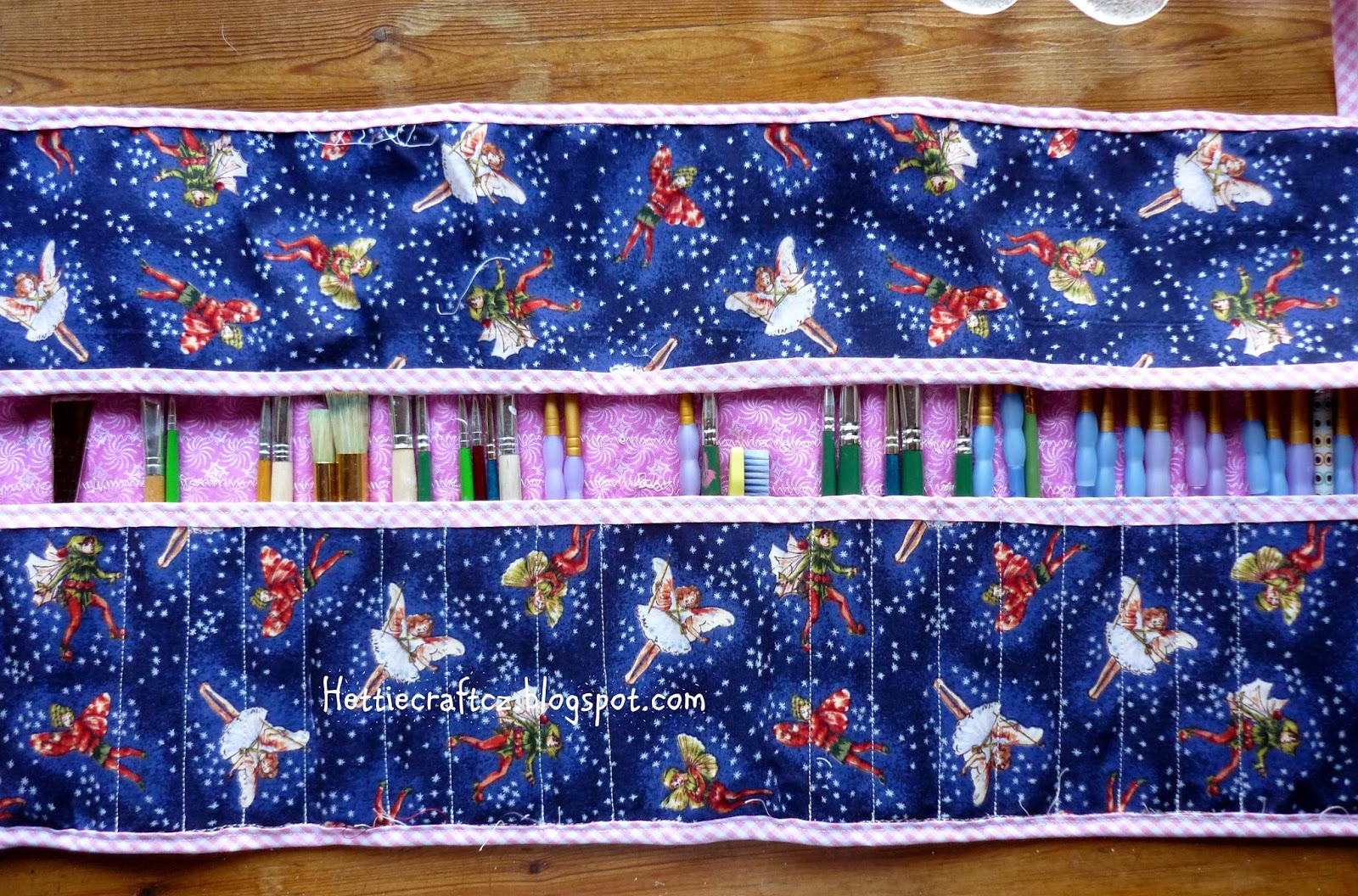 I know the pink will not stay untainted for long but it was there, as with both fabrics they were left over from previous projects and just enough for what I wanted to make now.  So I guess they class as Snippets.  That is a little of my fabric mountain reduced too!  Yippee!! 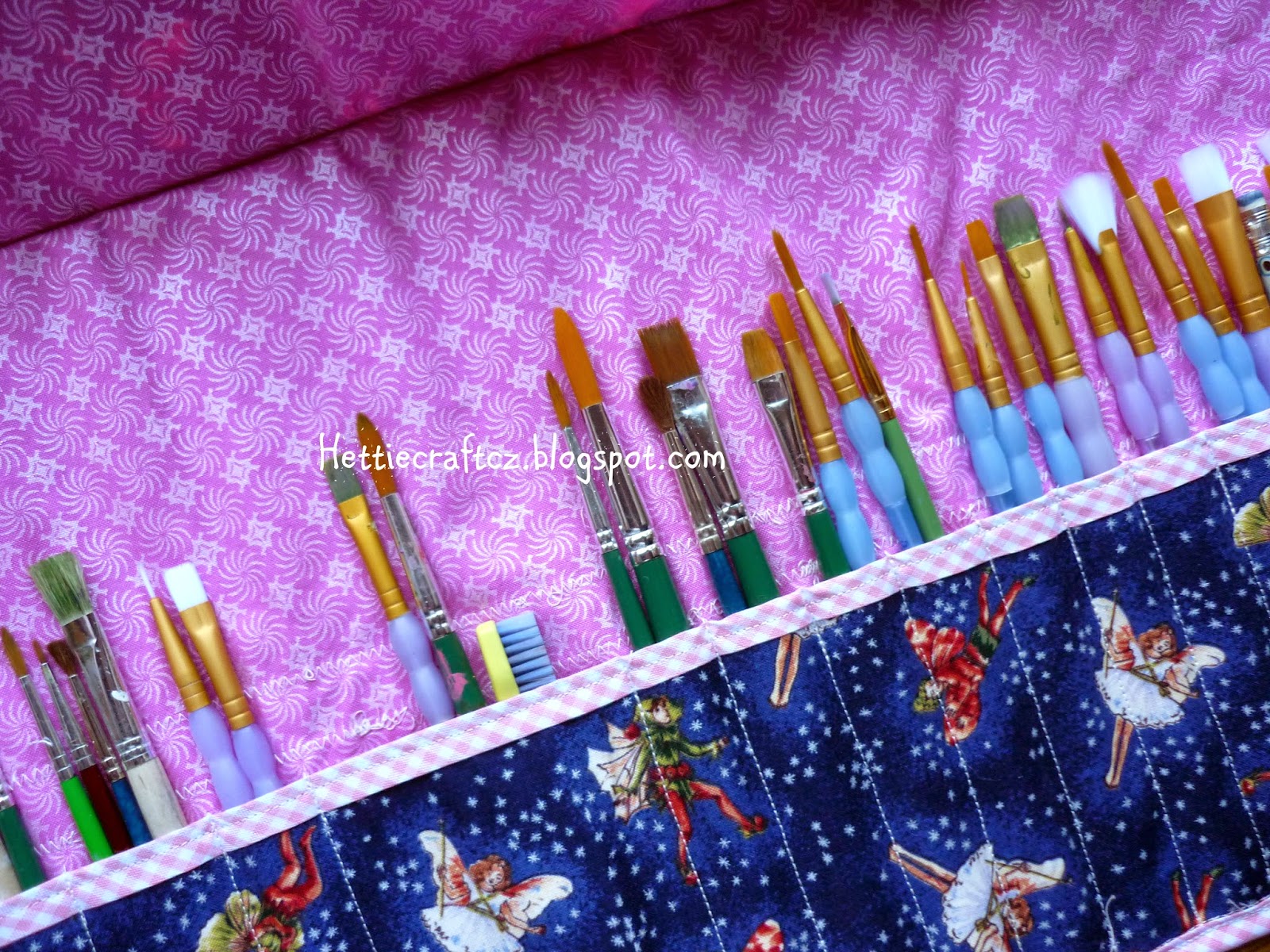 My friend's daughter liked it so much she wanted one so now I have to make another one!

Off down to the Snippets Playground with this to show all the girlies.  I wonder who else will want one now?  (Having just seen Miss Di's post today, it seems that she is in need of some company to deter her from talking to a die cut cat!)

Thanks for calling by.  Hopefully Mr BT will have sorted our broadband out now so I can visit you all later.

What a grand idea and a beautiful carrying case for your brushes! I remember my mom making a knitting needle case much like this one too! Well done!

I have just had one of these made for a student. They are very handy.

Oh, yet again, you clever little sausage Sam! Great idea and super use of fabric snippets.

OMG Hettie - I love this..now I want to make one, so I can store all my shiny new brushes. I didn't realise you were UK based - what fun this craft blogland is, hooking us all up. I see you took part in Stenciled, I am just about to start it. Cx

Now that is one great way to carry and protect those paint brushes. You are so talented and I just love this! So is the second one done?

Wasn't sure if it was going to be a 'drum' or a 'toilet' lol.
It is fabulous.

This is great, lovely fabrics and a very good way to use up left over bits.My Mum made me something similar for knitting needles as well, when I was a teenager and I am still using it.
Jean x

Brill idea and brill roll/wrap. Hmm. Now let me see. Beginning of a few brain seeds sprouting away here.
Off to see wot Miss Di is up to with the cat. Internet is OK but blogger is playing silly b----grs with my Reading lists. First I see them then I don't so it's a bit like fishing in the dark when it comes to commenting. Hugs Mrs A.

This is gorgeous! Not only do I love that fairy fabric the fact that it is pink inside and such a beautiful way to store your brushes too! You are a real crafty whizz Karen x

I think we have spoken to that same Indian gentleman! What a small world we live in...lol

Your case is a brilliant idea. And...what lovely paint brushes you have!

I have silverware cases like this. They are made from anti tarnish cloth and there is a slot sewn for each spoon etc! They were my Grans and I keep her silverware in it. Mine has a antitarnish box but here is kept the old way!
I like that you were able to use your snippets...fabric snippets that it....the mountain must be slightly lower now!
Methinks you could market these!

You are so clever!
This is pretty and so very practical.
Please note that I will not be sharing a photograph of my paintbrushes any time soon, they are starting to show their age!
Wishes
Lynne

This is lovely! But I would hate it getting all mucky once brushes had been used! Therefor would have to be used for clean dry brushes only, no transporting wet and icky brushes :-)
Hugs
Debs

Oh, this is so beautiful! I wish I could whip up something like this! But I don't even have a sewing machine...

Well done you Sam... you know what I used when I wanted one..a makeup brush roll... as Avon rep. That was easy peasy. :) Shaz in Oz x

I'm not surprised you've already been commissioned... I bet these would sell like hot cakes! Fabulous work!
Alison xx

What a lot of paint brushes! And what a wonderful way to store and carry them!

When I find myself on a deserted island or a raft in the middle of the sea, I want you there with me, Sam! I think that says it all!! Hugs, Darnell