Scrapbook Tuesday.......And it is finished!

Welcome to this week's edition of Scrapbook Tuesday.  I hope you are well and have a cuppa as this post is a little photo heavy (but not as photo heavy as it could be!).  I thought that as it is now heading towards the middle of the year it was high time I shared my Christmas Album with you.  It has been finished a while but I just have not got round to photographing or sharing it with you.  So sit back and take a peek at the finished album and I will try not to butt in too often while you browse.. 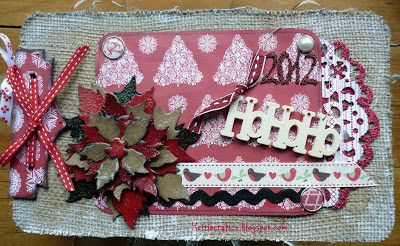 The album was taken from a pattern which I bought and downloaded from Laura Denison of Following the Paper Trail. I covered the outside covers with hessian and then adhered Papermania papers, which I have used throughout, and decorated with embellishments including the Poinsettia die cuts which my friend Helen let me cut at The Crop I.  Thanks Helen.  (In fact I am not sure she had even used it when she let me borrow it!) 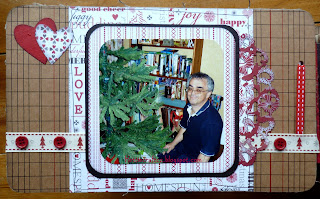 Inside cover with a piccie of Mr Hettie putting our second tree up in the Dining Room for me.  He actually ended up decorating it too!! 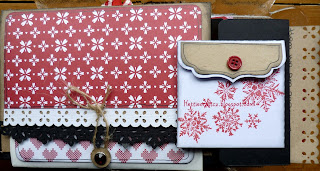 Inside pages showing all the pockets, journal cards on which I stamped, buttoned, ribboned, punched, strung, die cut and doodled on. 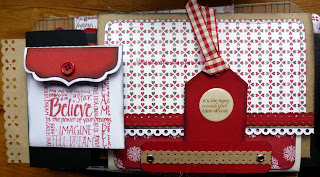 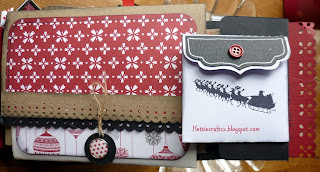 Papers used were from Papermania and cardstock was Bazzill. 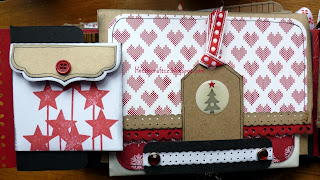 Buttons from Hobbycraft and Brads from MME.  The domed stickers were from err!  Forgotten.  I will try and remember. 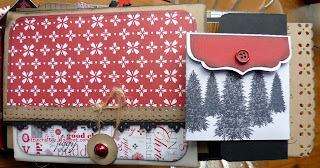 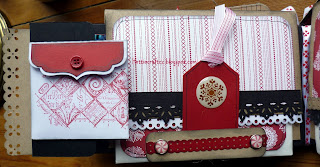 The small pockets were cut using the Silhouette.

Ribbons came from a number of sources including Snippets.  In fact there are lots of Snippets in this project! 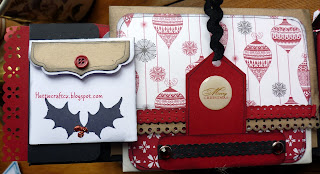 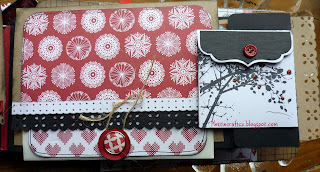 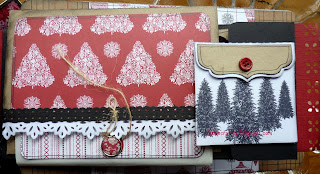 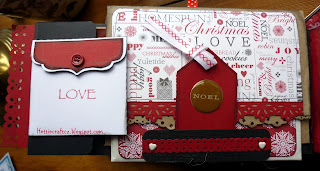 Inside back cover.  One of our latest decorations bought in our trip to Bath for the Christmas Market. 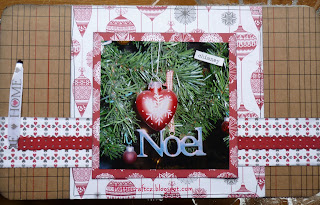 The decoration on the spine was made using alcohol inks resist technique and a Memory Frame from Ranger.  Stamps were Tim Holtz. 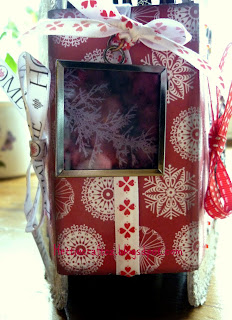 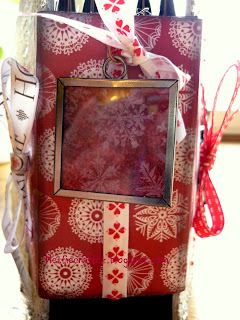 And here you see a taster of what the pockets contain.  Three photographs which were dated and which signified aspects of a particular day.  They were not in strict order, it sort of depended on the photograph.  The tags were photographs of tags that I made for the Funkie Junkie 12 Tags of 2012 which I shall definitely be joining in on this year.at the start as opposed to Tag 9!! 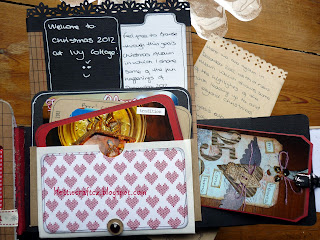 The end cards contain journalling as do the insides of the flaps to comment on the photographs.  I bought the white Sharpie pen from HERE and it is the best pen I have ever used for writing in white!

As the Papermania paper pack I used for this was 6x6 I can enter this into the Simon Says Stamp and Show Challenge this week - yippee!    Serendipity strikes again!

Crazy Hazelnut is looking for stars this week.  I know there are plenty hidden in this album so I am going to pop this project into that challenge too.

I have to say that I thoroughly enjoyed making this album.  The paper engineering was alot of fun, even if it did create alot of mess and "Punch Poo" at the Crop.  Incidentally, if any of you who are going to The Crop II on 1 June would like to see this at close quarters, I am willing to bring it.  Just leave me a comment to that effect.

Right.  Off to beddie byes now as I am feeling very tired and very sniffley and this Rum Toddy is starting to take effect on me!

Hope you feel better when you read this, my Dad always swore by rubbing your chest with a whisky bottle for colds and coughs........after drinking the contents!

Your album is beautiful - but can I please say it really does need to be seen in real life to appreciated just HOW beautiful it is! Do take it to the crop hun. And yes, I think you did have the very first play with Helen's Poinsettia die - and yes, you did create a bit of a paper poo mess all around you! But what fun, only sorry I won't be there this time.

Ohhh...wish I could be there...I long to plan a trip to Britian based on crop dates!!!

Your book is fabulous. You did a marvelous job with the various pockets and envelopes. Love all the stamps and punches and papers. It is a thing of beauty!

You were more than welcome to use it!! I am glad it's finally seen the light of day on your album - which looks (of course) absolutely gorgeous... it's nearly time for the next one!!

Goodness me . . . this looks fabulous Sam. Such a lot of hard work has gone into it, but the results are worth it. "Punch Poo" made me laugh!

This is a beautiful memory book. It's very sweet and you will have such fun bringing it out each year.
Hope you feel better soon.

Saw your creation at Snippets - love it - wish I could do that style. As it looks so good here I bet it's even better IRL. Feel better soon Karen x

Ohh what a fabulous Christmas album! Love all the pattern papers and the little enveloppes are too cute! Thank you so much for joining us at Simon Says Stamp and Show. Hugs, Sandra

Wow! such a wonderful project - thanks for sharing for my CHNC challenge 124 - hope to see you again soon. x

Oh there are definitely STARS on every page of this lovely work of art. Each page reflects so much love in what you do, so well designed & great color combos. What a memory book you've created, with so many interesting textures & techniques. TFS & how lucky you are to have Mr. Hettie to decorate your tree.

I love those darling little purse pockets on the pages. A really natty idea. I never never touch the Christmas tree. More than my life is worth! Antidote to this weeks story. Annie the dummy gave several of us girls a nasty rash on our lips. The trainer allowed us to use a hanky in the end. A reaction to the silicone moulding she said. Hugs Mrs A.