At the end of last month I shared with you THIS post which had my altered Mail Box on and which I had entered into the Fashionable Stamping Challenge.  I was very pleased to learn that I had won the Challenge! 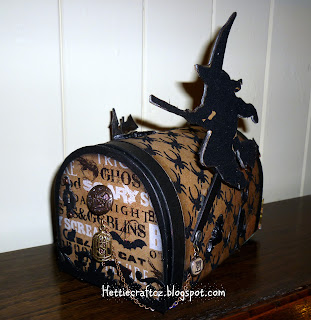 I had not come across this Challenge blog before I was introduced to it by Terry, but I rather like it so I decided to enter the current Challenge which is Music and here is my card..... 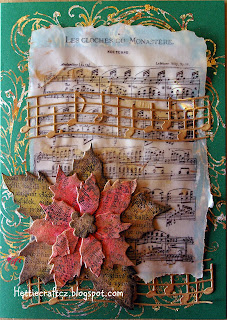 The background of the card has been made using my Tim Holtz flourish stamp and gilded with Indigo Blu gilding flakes (first time of using!  Tip - don't sneeze when using these or else they will get everywhere!).  The next layer is a Snippet of SU Vanilla cardstock which has been inked with Brushed Corduroy DI, although you have to take my word for it as you cannot see it until you fold the music sheet back.

The music sheet was created using a WOW stamp, one of my buys on Thursday, on vellum using a technique shown by Mr Tim Holtz on his 12 Tags of Christmas 2009 (Day 9 I think).  I made the music notes with my new Memory Box die, again using a Snippet of SU cardstock, which I inked with Brushed Corduroy DI and brushed over with some gold Perfect Pearls. 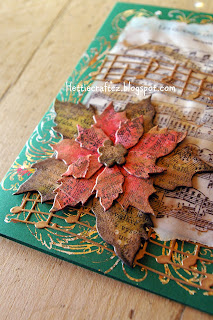 The Poinsettia was cut with very thin chipboard to which I had attached sheets I had cut out of a Czech book which I am using for another project yet to be completed.  I then inked the petals with DSs and DIs, edged with Black Soot DI and swooshed with my new favourite DS Antiqued Bronze. Once inked and dried  I then stamped over the petals with the music stamp.

I also added some smudges of my Treasure Gold wax to give it some sparkle.

Thanks for looking and why not pop over the FSC and join in as you still have a little time?

Let me know what you think!

Oooh its lovely - wonder where my 10 year old gilding flakes are??? will have to have a play with them soon!

What a beautiful musical box, it's gorgeous.

I love your poinsetta card, so Vintage, delicate and beautifrul.

thank you so much for your kind comment on my blog.

Congrats on your win honey.

A well deserved win Hettie and what a beauty you have entered this time. Brilliant.

Well done on the win Sam - so well deserved. And this card is a real beauty as well. I did laugh about the gilding flakes, I only tried mine once so far and guess what - I sneezed too!! Man, does that stuff travel!!

Shame you didn't get to eat the roasted potato from the bonfire :(

Lovely card - lots of work - you couldn't make all your Christmas cards that complicated! You are very lucky to have got the tattered Poinsitia - I have been trying to buy it with no success - sold out everywhere! Huh!
Lots of hugs,
Cardarian

Congrats on the win - well deserved ;) Also your new entry looks wonderful, great texture on it. Thanks for joining us at FSC this fortnight.

Well done on your win, Sam although I'm not surprised, your mail box is stunning. I think you could well be doing the double with this musical creation, it's stunning. I love everything about it and there are lots of techniques I need to try!!
Hugs Lisax

This is one stunning card! I love this pointsetta! I would love a card like this in the mail!! Beautiful art, Sam.
Kate

Congratulations on your win, you certainly deserved it with that wwowwy altered post box. The card is fab, loving the poinsettia die and the memory box musical notes. Lynn x

This is another stunning creation, and the guilding flakes make a beautiful background.
Thanks for joining us again at FSC
Avril

Congratulations on your well deserved win, and this is another show stopper, beautifully made, thanks so much for joining us again at FSC and good luck. XX

Congratulations on your win and so glad you now know where to find us :)
Incredibly elegant and so very festive, a very special card indeed.
Thank you for joining us at FSC this fortnight.
Wishes
Lynne

Gosh this Christmas card is stunning! Love all the layers and details.
Hugs
Bernie

This is wonderful! Many congrats on your win, too, the Mail Box is fabulous!