What with all the packing up of my many bags on Friday night for Saturday's WOYWW Crop, I did not get round to posting up my mini album which I started at the Retreat I went on earlier this year.

On arrival at the Retreat we were given a box containing some papers, a piece of acetate, some string!, two paper bags which had been stitched to form a book and some embellishments.  We were all to make a mini album with what we had been given.  Unfortunately I had packed light (hence why I now take too much rather than not enough) so was rather limited as to what embellishments/stamps I could use.  However, I just had to improvise and other than the addition of a few stamps and some extra doodling when I returned home, this album was mainly completed at the Retreat.

It is a picture heavy post so get yourself a cuppa (or something a little stronger!) and take a peep.

The background to this mini album is the setting up of the chicken run and the arrival of our first chicks in early May 2011.  The album is dedicated to my lovely Hubby who had to do most of the work without my help as I had recently had knee surgery..... 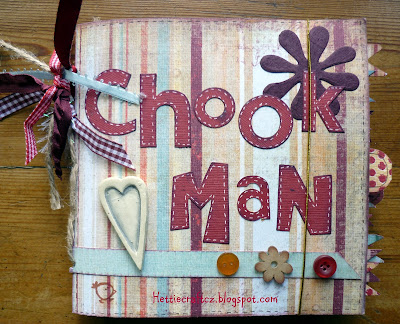 Here is the cover on which I used the Alphabet dies that were there and the buttons were from my mini guillotine which has a sliding drawer for keeping bits 'n' bobs in.  The chicken stamp was from my Artemio set.  The heart on the front is an East of India heart that came off a gift tag some time ago (i.e. a Snippet amongst many that were used!  Snippets are not just for cards!!) 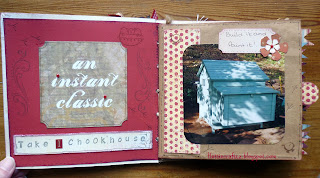 Here is the inside of the cover... Take one Chookhouse.. 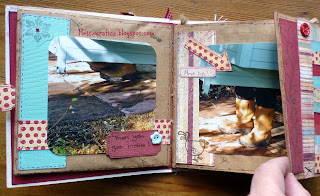 If you look carefully you will see a pair of feet poking out of the bottom.  Unfortunately this was the only way Hubby could lift the chookhouse on his own and I found it hilariously funny and had the camera handy.....a true scrapbooker! 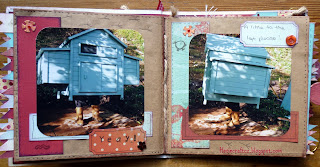 Then I kept asking him to move it left and right just because I found it sooo funny! 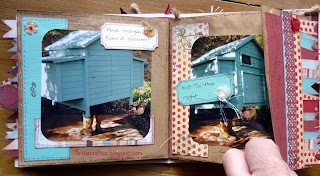 I don't know how many times I asked him to turn the chookhouse nor how many photos I took.  It kept me entertained for quite some time! 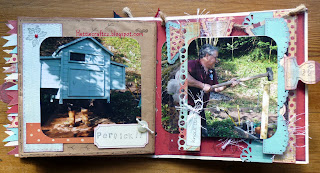 Here on the right you can see what I did with the acetate.  I folded it and added a tab onto the edge with "Pull me" written on it... 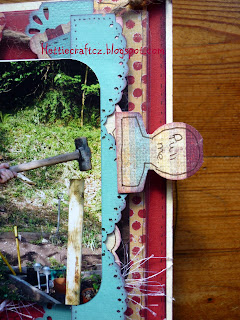 I have to say I had great fun with all the punches that were available at this Retreat!  It certainly encouraged me to add to my small collection, and the first addition was the bunting punch from SU.  One of the best I have bought!  Through my buddy Sandra of course!

And here is the acetate at full length and the first photo of the chooks in their run! 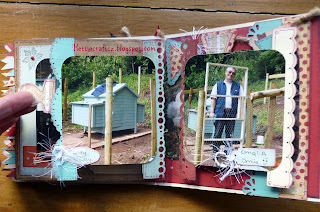 And here is the other side. 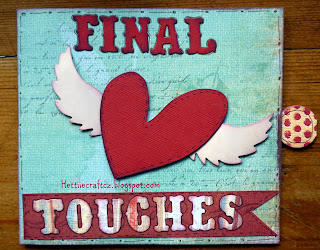 The paper bags formed two "pockets" and I was able to make a small book to fit in each pocket of the album.

Just putting some bows onto the door of the coop and run to welcome the chooks in before we went up to my friend's house to collect them. 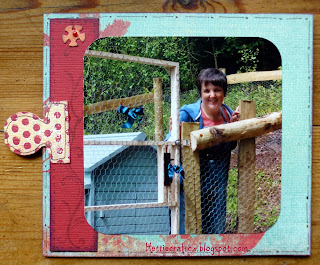 And here is another book with some photos of the chooks. 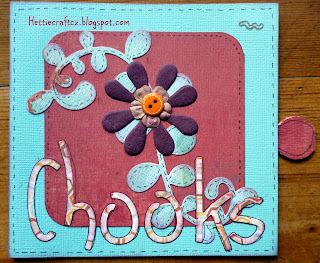 This is Betty on the left and Wilma (one of the two ladies we lost to Mr F) on the right.

Here you can see Betty, Abbey (the other victim of Mr F) and Myfanwy with Ziva's beak peeking on the left! 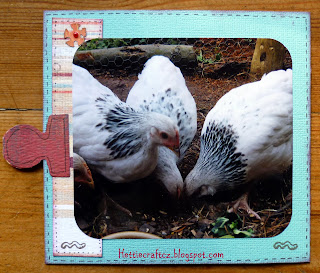 Thanks for staying with me this far.  Please let me know what you think!  It is a lovely way to mark the occasion of our first chooks.  Those peeps that were at THE Crop on Saturday will know that I like to make mini albums.  They are great for those times when you need several photos to tell the story but the photos you have would not be suitable for 12 x 12 layouts.

I would also like to say a Hello to Li'l Pidge who I met on Saturday.  Thanks for becoming my latest Follower.  I cannot believe I am up to 99 now!!  Wow!  Thanks to all my followers for giving me the encouragement to keep this blogging malarky going!!  Will have to think of something special to mark the occasion of the 100th Follower if and when it happens!

What a fantastic keepsake Sam, one you will always treasure. You have clearly put a lot of time and effort into creating a gorgeous album, well done, it's lovely.

Oh Sam, this is fabulous!! Can't help but laugh at poor Simon wandering round with the chikken house as an overcoat - I'd have been rolling on the floor I must admit.

I was totally bowled over by your Christmas album in progress when I saw it on Saturday - you clever little crafter. And am sure this one is every bit as gorgeous in real life. Ha, you need to do videos maybe?

Wow, such a fabulous mini. I love all the boardered edges and pretty patterned paper. Such a cute mini!

Oooh its very nice - looks like you had lots of fun making it! What day are you going to Hobbycrafts again? I still ordered my ticket but am still hoping to go!

I agree with Di, I was inspired by your Christmas album you were working on, looked fab and this one is equally stunning. Take care Zo xx

This is stunning, Sam, I love it. The sight of your chook house with legs is priceless, I bet you were flavour of the month asking him to pose while you took your pics. I love the fact that the house is blue too. It's a real work of art, bet your chooks are the happiest in Britain!!
You'll have 100 followers before you know it!!!
Hugs Lisax

Hilarious pics of hubby wearing a chook house. Beats an umbrella any day! Hugs Mrs A.
p.s. Have been hearing all about your moutains of luggage you took to the crop.Did you remember to bring it all back home again!!

Fantastic Sam, Loved looking through your chook story.. That chook house is a work of art... Hugs May x x x

How egg-citing!! Great scrapbook and love the new chicks.

Great mimi and on such a great topic.

poor, poor hens who didn't wurvive the mean looking Mr of the right!!!

Your chickens must bring you lot of funny storis and warm your heart.

Such a clever way to document your chickie's first home. I must say you have a DH with extreme patience. Mine would never have let me do all the moving about while he had a chicken house hat! Loved this picture,& thank your DH for allowing you to share it! Your chickies have a most lovely house, and I enjoyed reading about your adventures while locating it. Lovely album.