Scrapbook Tuesday - In the Pink!

Do not adjust your set.  This is a bright PINK layout today!  I know, I know, I am not the Pink Queen!! I am usually more of a Purple Peril but today is schpeshial 'cos it involves a Charity fundraising event which yours truly took part in.

You may recall earlier this year I was praying for good weather as I and a few colleagues from work were all walking for the In The Pink Charity, which raises money for research into Breast Cancer in Cardiff.  So here is us at the end of the day in pictures.... 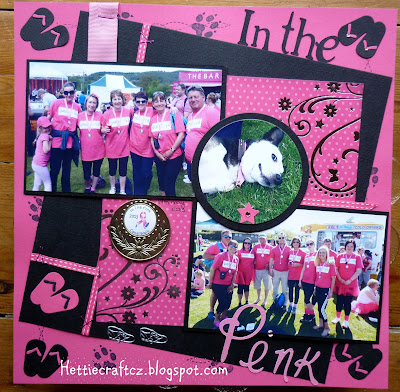 Here are, the motley crew, all dressed in pink t-shirts and other items of pink clothing, some of which were not on show! (I was wearing something pink but I am not showing - my excuse and I am sticking to it!) 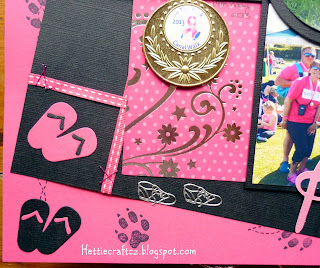 Our medals we were were presented with. 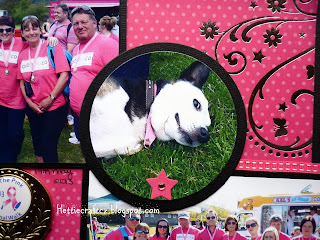 Dobby was a trouper.  He isn't used to 10 mile walks but he did not complain once, though he was desperate for a lie down at the end!  He even got his own medal! 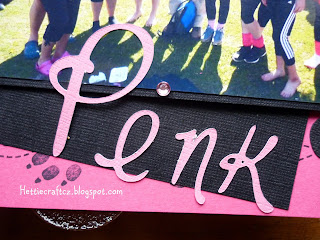 Various states of attire on the feet I see! Not noticed this until now!! 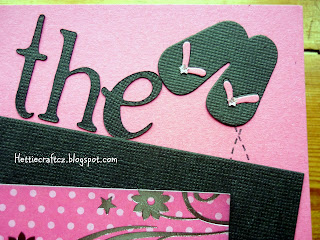 Who can resist stars on the flip flops!

This layout came about as I was removing the medal from where it had been put and decided to scrapbook it straight away rather than put it in a drawer!  Aren't I a good girl today then!

Papers are Bazzill, DCWV and Silhouette adhesive paper (Snippet of). I used my QuicKutz tool (VOS) for the flip flops and star.  Cricut for the text.  Black Archival ink for the stamping and NBUS sewing stamp and also my doggy paw stamp. Dobby and his mat were cut using Spellbinders.

Thanks for popping in.  I shall take this over to the Playground as there are some Snippets in there.

Top tip for today!  If you gut the base card so that you can get the same pink for the flip flops, don't merrily place adhesive on the layer of cardstock over the hole you have now made.  This makes the back of your layout stick to the table - with an ATG gun - very well!  Doh!  Though I used a Snippet of white cardstock to prevent this which now doubles as a place to list the participants!!  We raised just short of £1,600 for our walk!  On to next year now!

Super amount of cash raised there. Well done you and Dobby + friends.. I.m here just playing cat and mouse with those high jackets. Working from my iPad which is a pain but at least I know it is safe. Hugs Mrs a.

Super layout and a fab amount of money raised - good on you and Dobby! He looks to be a very gorgeous beastie! Karen x

Well done on the fund raising Sam - and Dobby too of course :)

Brilliant (literally) layout - LOVE the vibrant pink and it's a great snippets make.

Good God that IS pink isn't it! Good job I was forewarned and had my sunnies to hand!

Congrats on raising so much money. You're a complete star (as is Dobby et al).

Brilliant fundraising and a big well done to Dobby as well! What stars! Love how bold this pink layout is - it looks smashing with the black contrast.

Well done you, Dobby does look exhausted bless him :D You made a great LO from your day too and congrats on the amount you raised, good job!! :D x

Wow - the perfect layout to celebrate your charity walk achievement... The flipflops are so cute - though I hope you were in more appropriate footwear for the walk!
Alison x

What a great layout to capture the memories of that successful fundraiser. That is a lot of money to raise and you all should be so proud. You all deserve it.

Loved the wee flip flops and had a giggle over the adhesive sticking...so like something I would do!

Still having a fab time...did a little shopping in Whitehaven and have been delighted to find there is a cardmaking/paper crafts store! What luck. Nothing like our fab trip to Flutterby's but still a sweet little store where I managed to find some of the famous magazines with free papers and stamps!!!

What a lucky girl I am!

What a wonderful reminder of the day! Love those flip flops and the pretty pink!

Well done you and Dobby and all the others! fab layout huggles Sue x

Hi Sam, a fabulous collection of patterns. I love the bright pink and black together. Great layout!
Kate