Happy 1st December to you all.  Can you believe we are here already?  Where did the last 11 months go then?

As my lovely Friends and Followers may remember, for the last few years I have made Christmas Albums into which I post either a photograph or journalling for each day of December.  This year is no exception.... 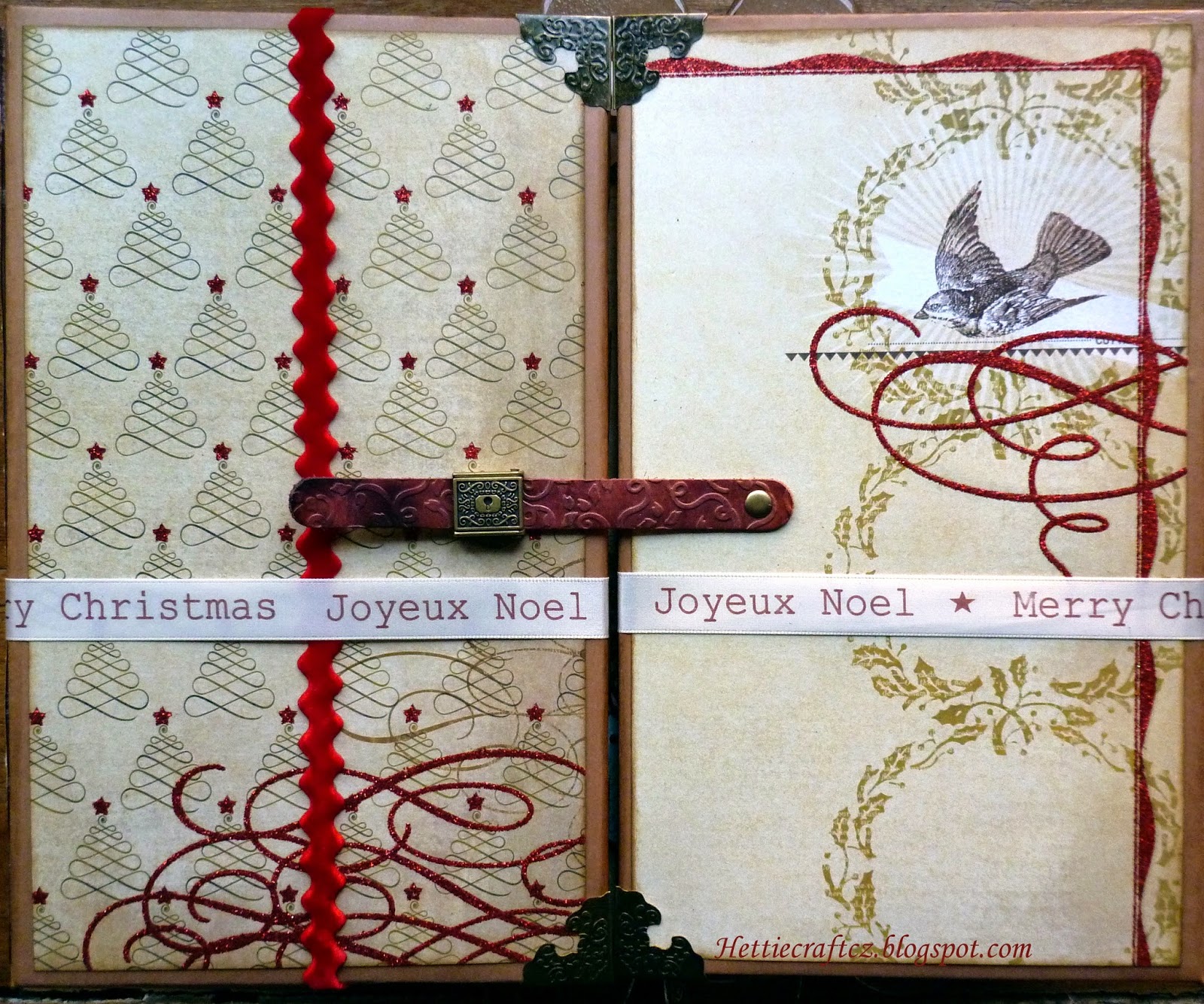 Here are the front covers of my 2014 Christmas Album.  I have used a pattern from Paper Phenomonon which I purchased around 3 years ago with the intention of making up into an album and so this year this is what I used.  The metal corners are Tim Holtz.

The main papers are MME which I had at a bargain price from Hobbycraft some time last year.  There was a pack and a few odd sheets with no price on.  I asked the assistant how much they were and surprisingly she asked me how much I would be willing to pay.  I told her £5 off the cuff and the Supervisor agreed to my offer!  There were around 12 sheets of doublesided, glittered card, a sheet of tags etc and previously I had paid around £1.50 a sheet!  Tee Hee!

Next I had to think about a closure.  Whilst racking my brain and looking around I remembered I had some clasps from Zutter.  I sprayed the leather with a mix of Red Pepper and Plum Ranger Colourwash, inked around it with some Vintage Stain DI and run it through my B/S with a Tonic embossing folder.  Job done! 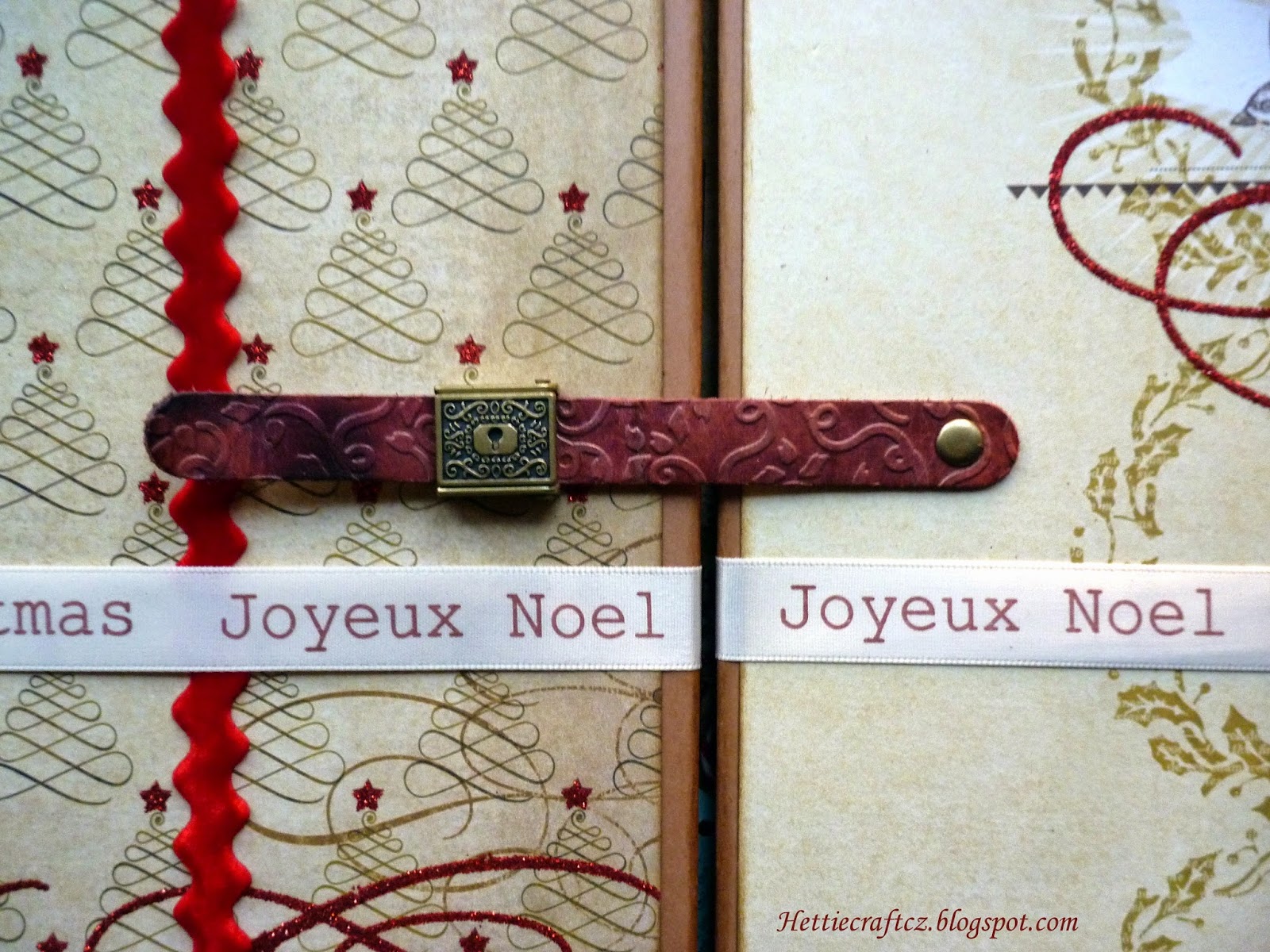 The ribbon I bought some time ago from a store in my local town.  It is straight and even only every time I open and shut the album it moves.  I didn't want it stuck down until the front is finished, when I know it will not move! 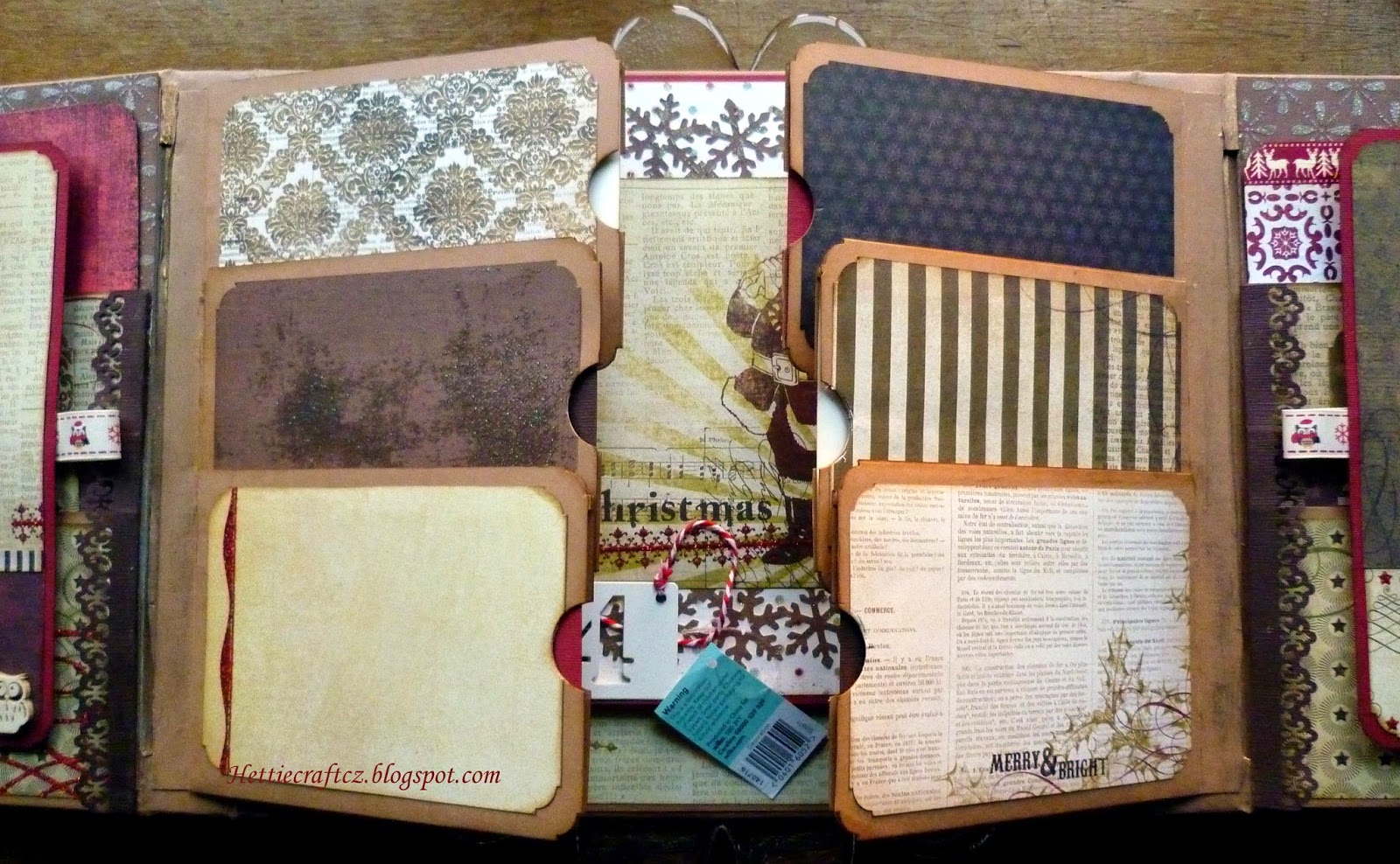 This is the centre of the front with six flap pockets which hold tags.  You will notice that they are not overly decorated yet.  This is because I want to embellish as I go along depending on the photographs/journalling that occur. 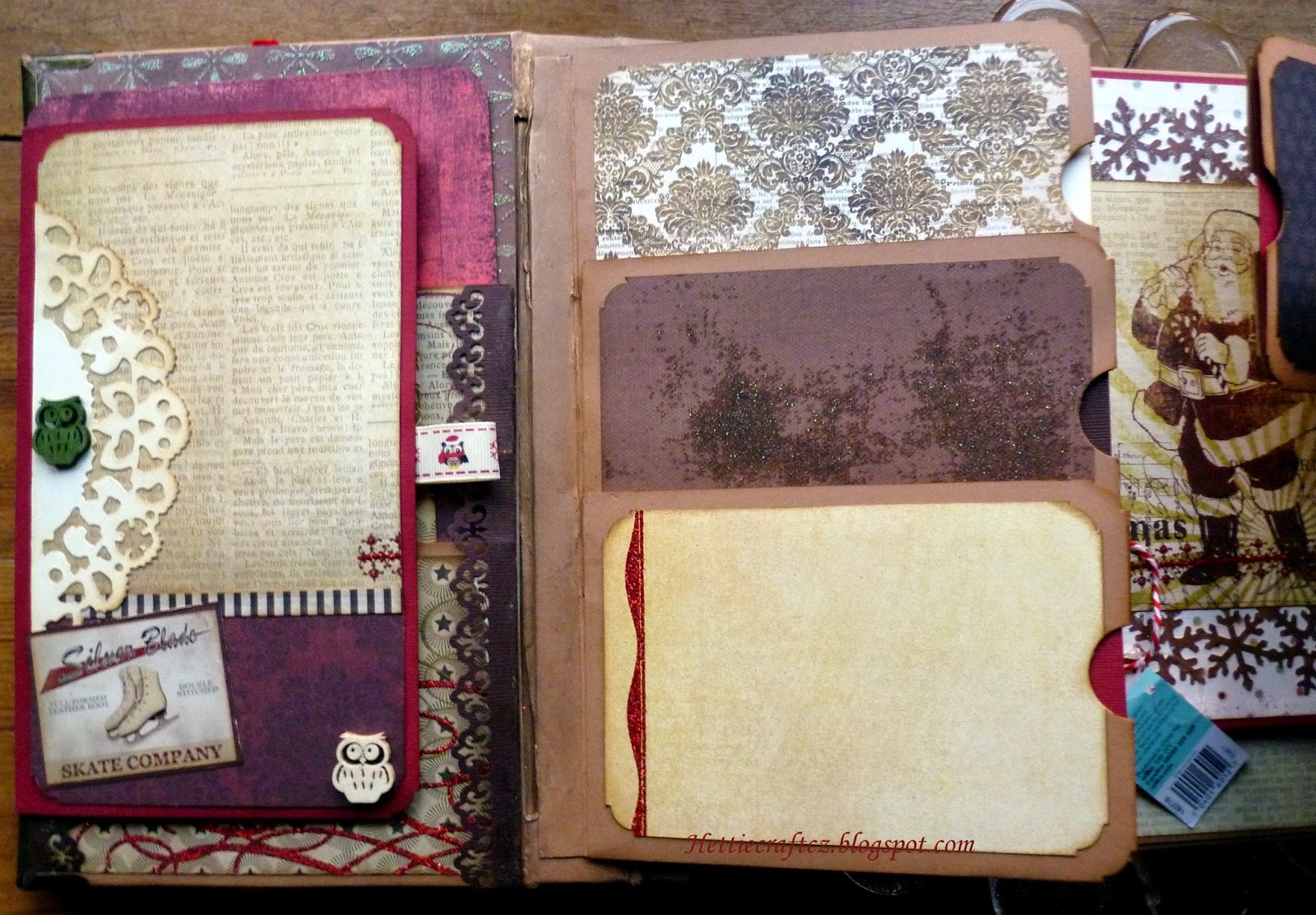 Left front inside cover.  A flap which when opened there is another set of pockets. 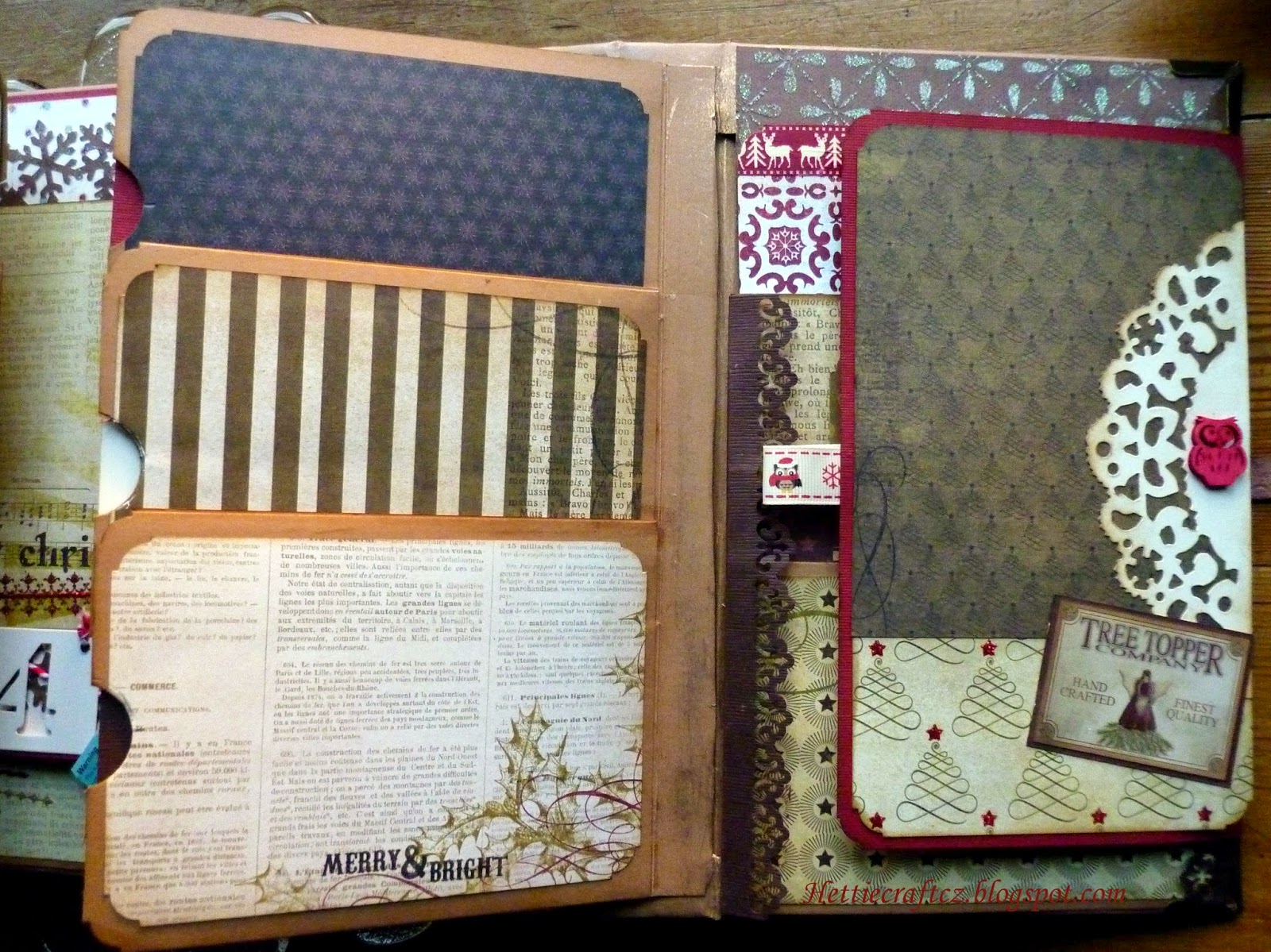 Right side inside front cover. 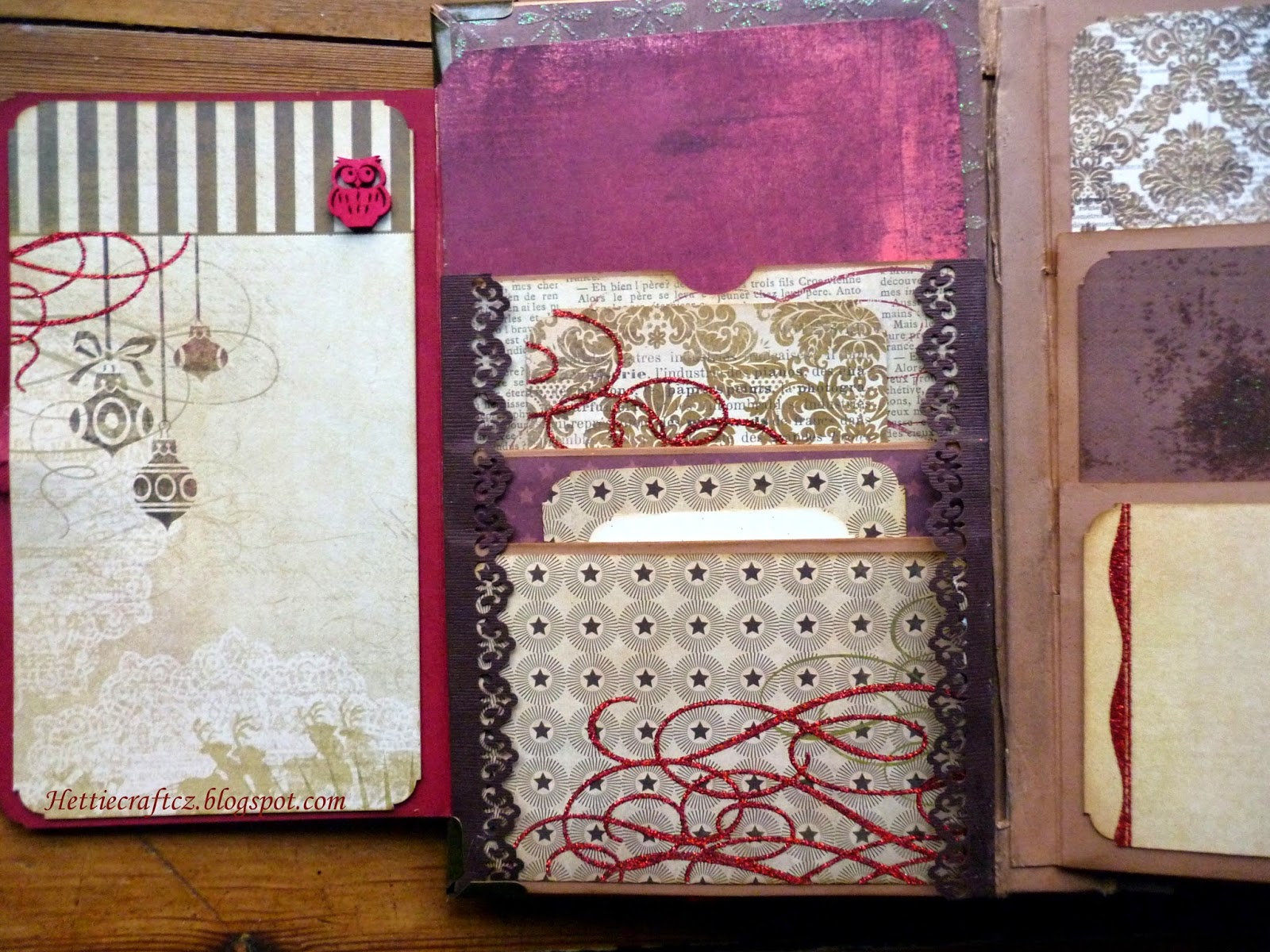 Left flap opened which shows the pockets.  Also you can see some of the other papers I have used such as Stampin Up, Basic Gray and Bazzill.  Some of which are Snippets from previous albums. 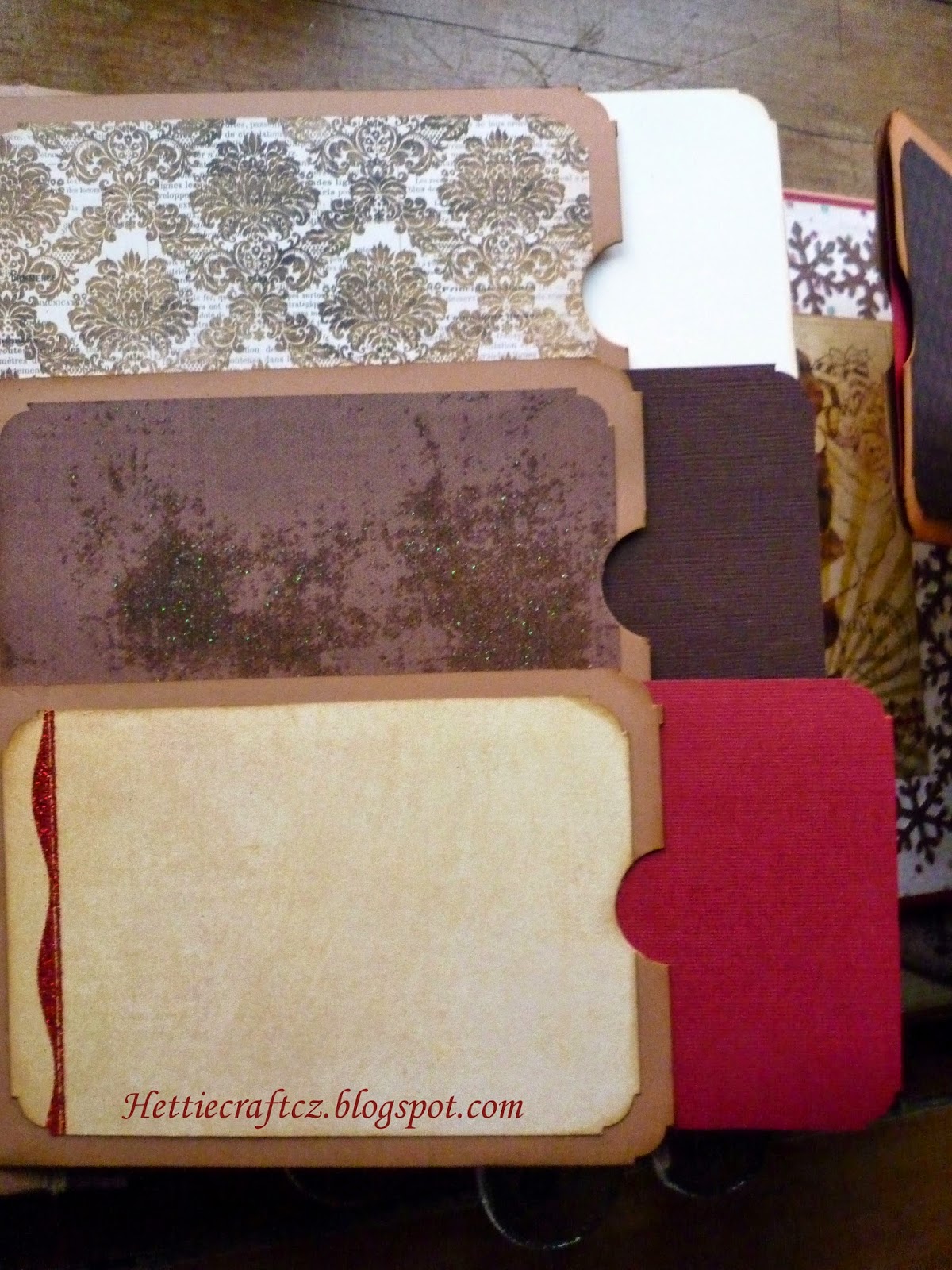 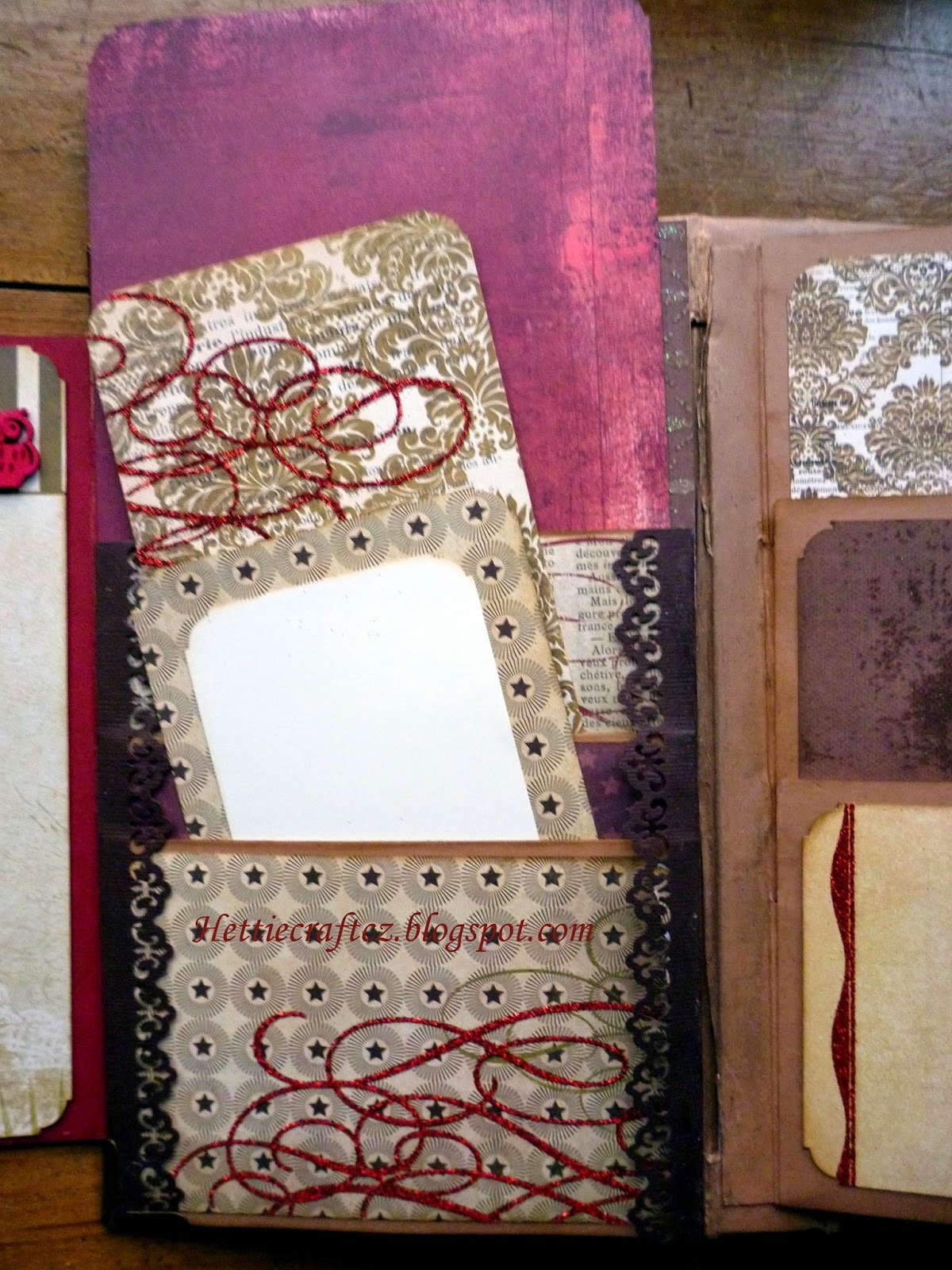 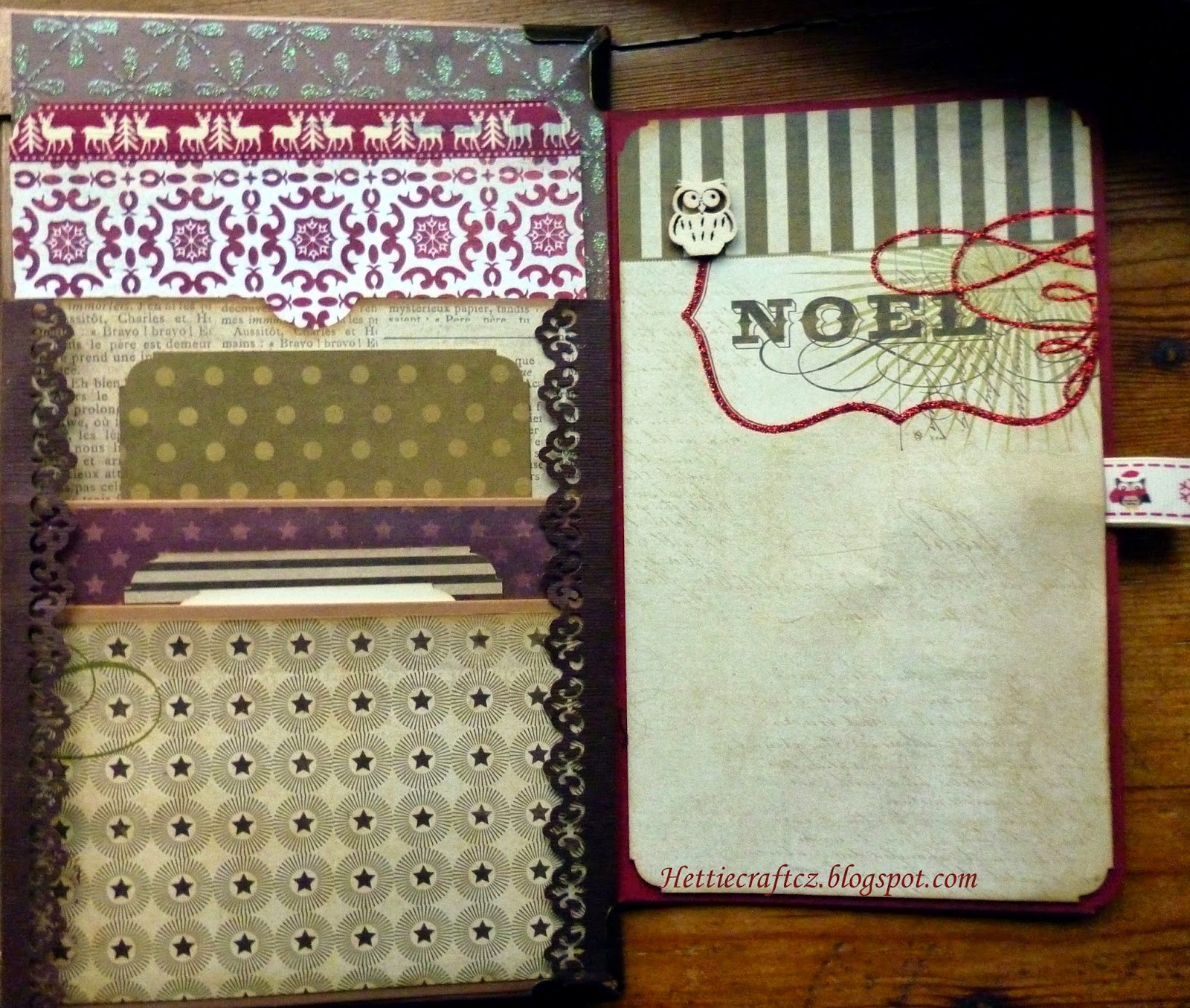 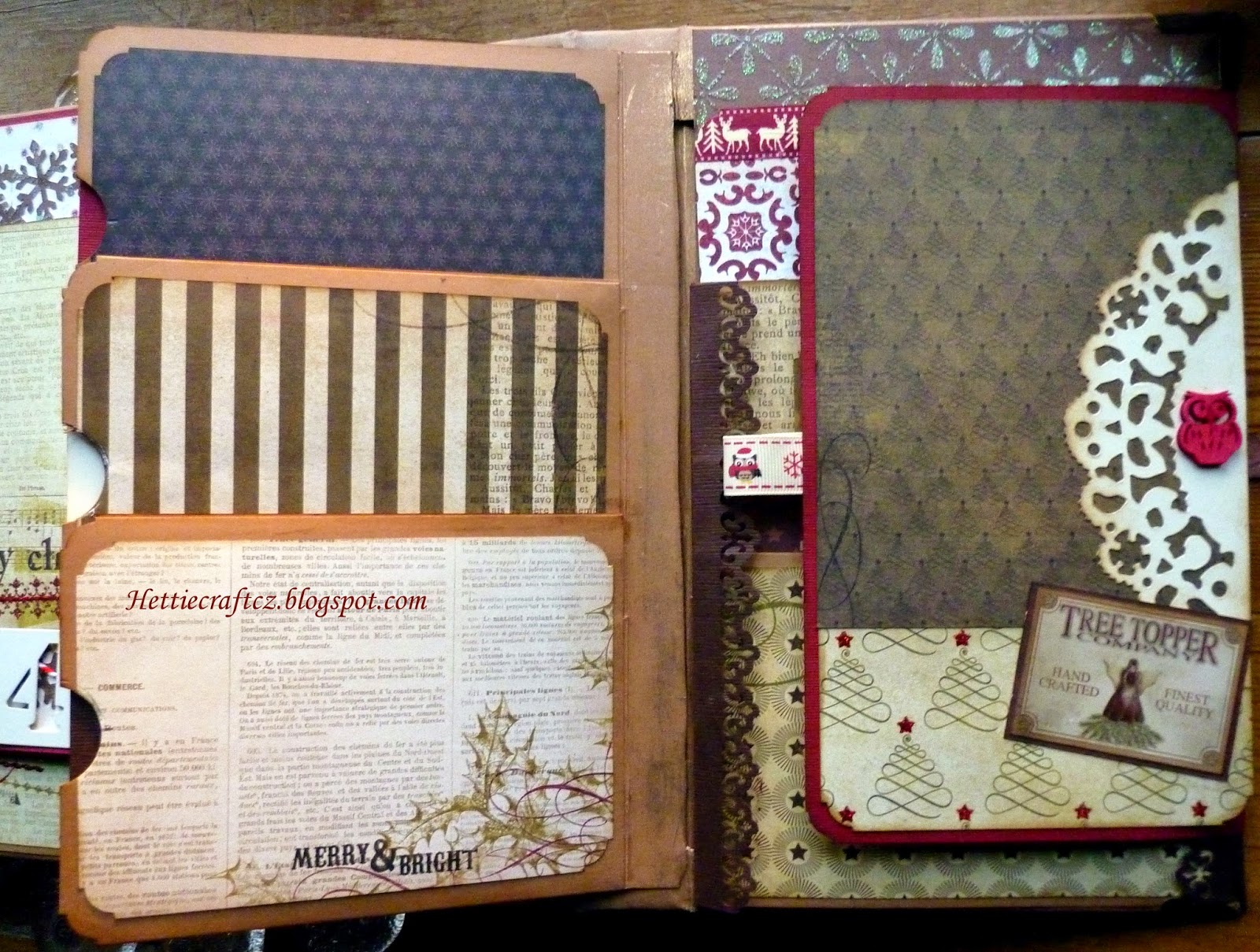 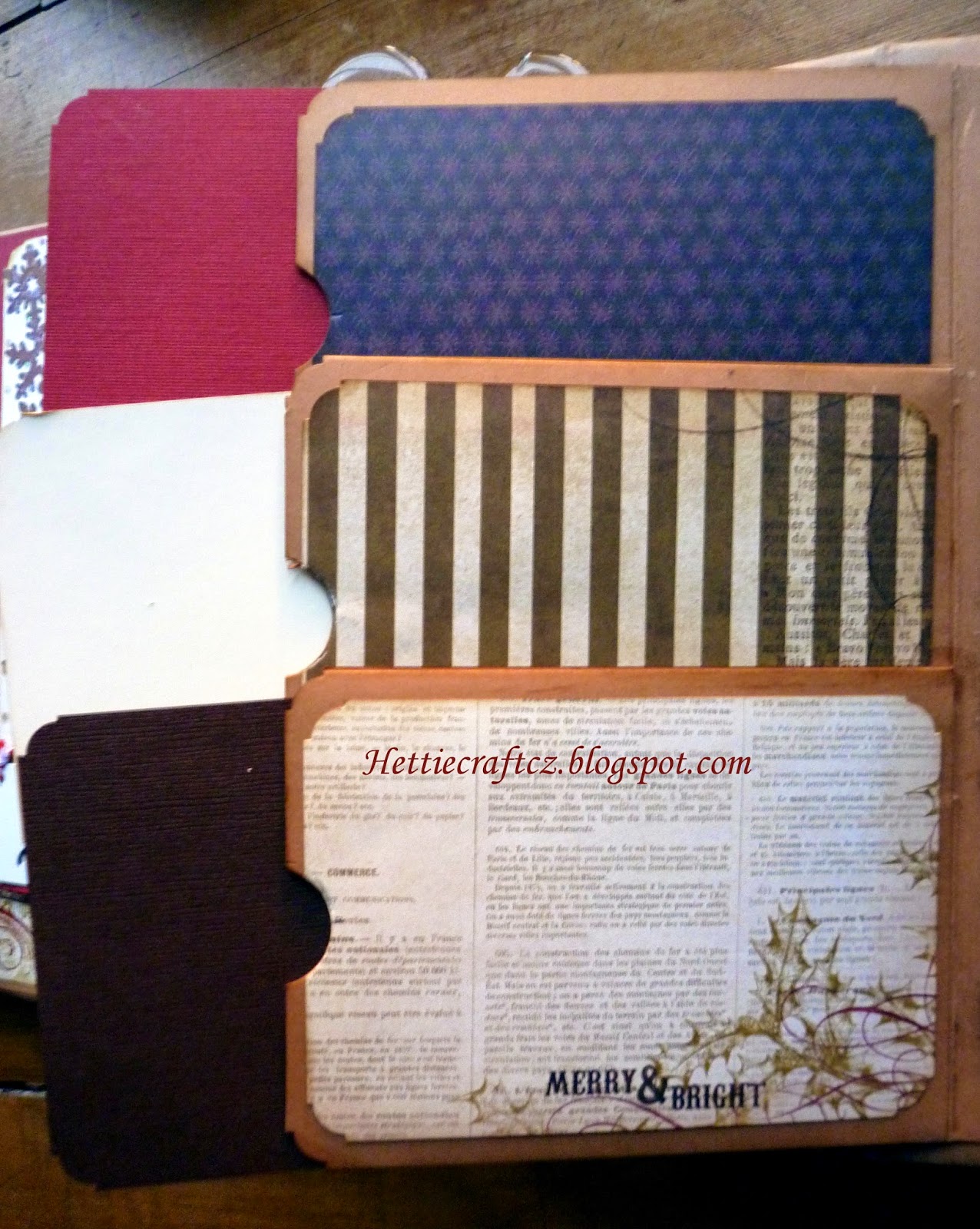 And here is the central panel... 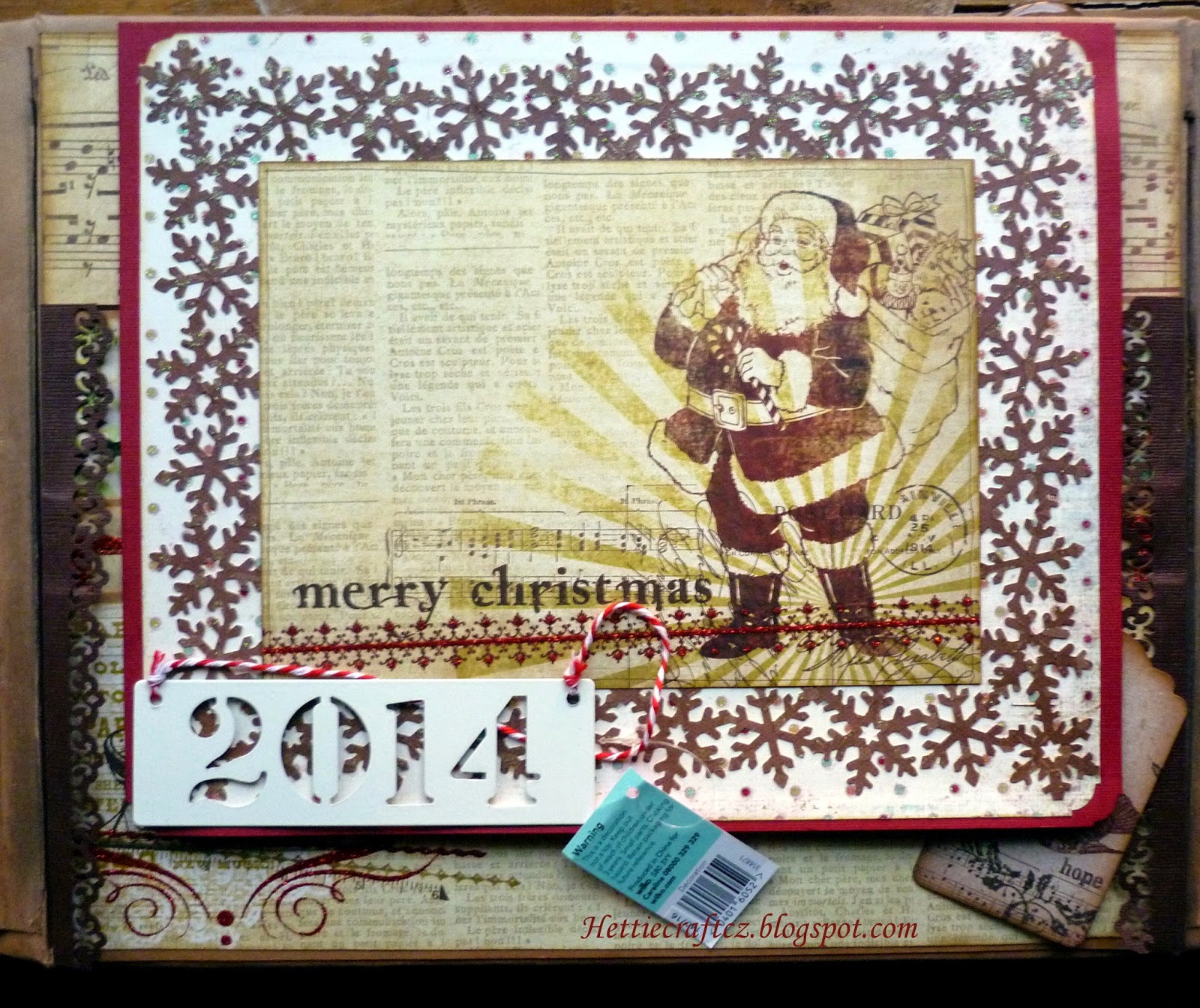 Punched around with a Martha Stewart punch.  I do hope we get some snow.  The 2014 is a decoration which I have bought and hope to incorporate, but not sure how yet.

And with the flap lifted, more space on which to journal and add photographs on. 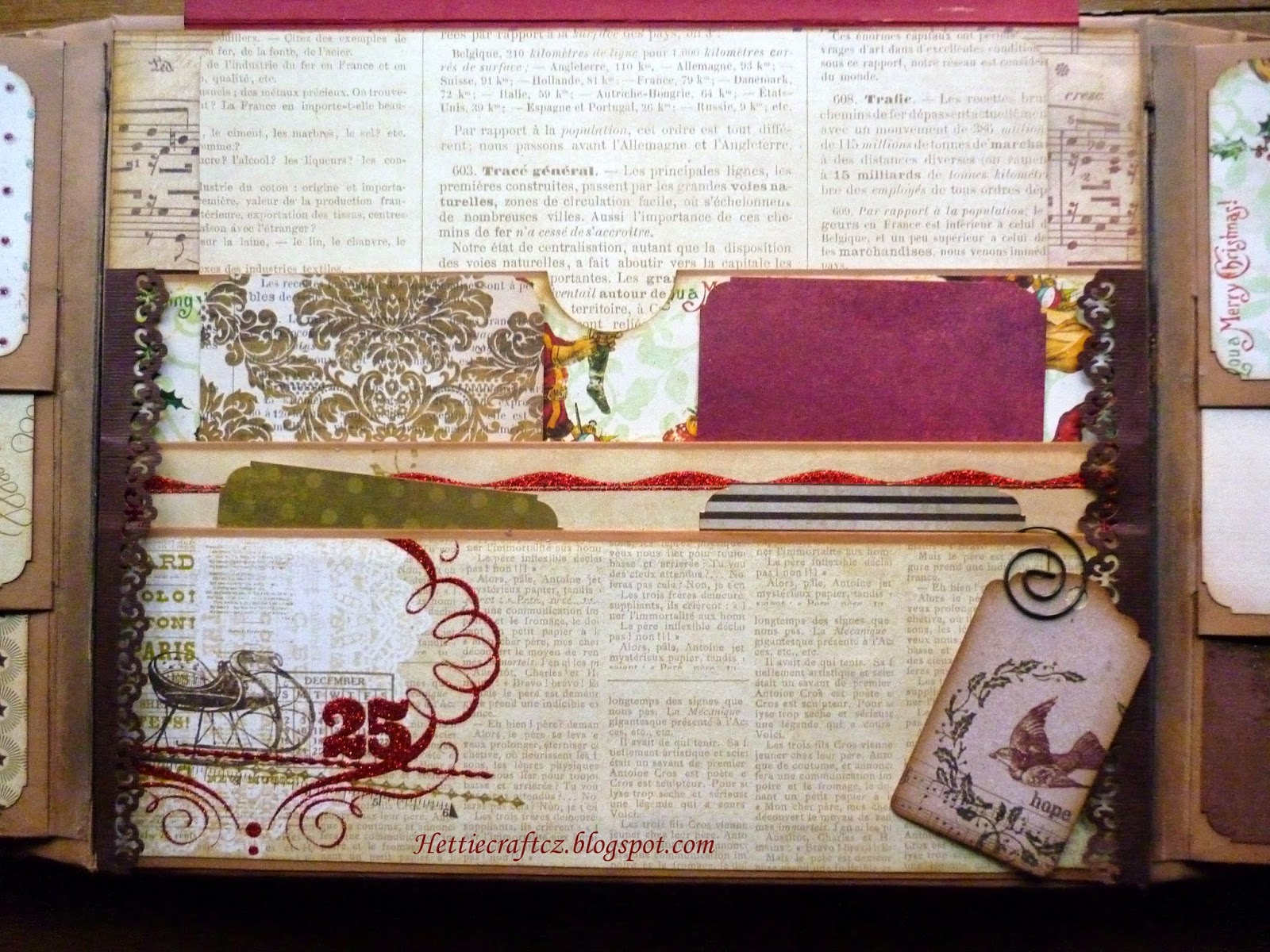 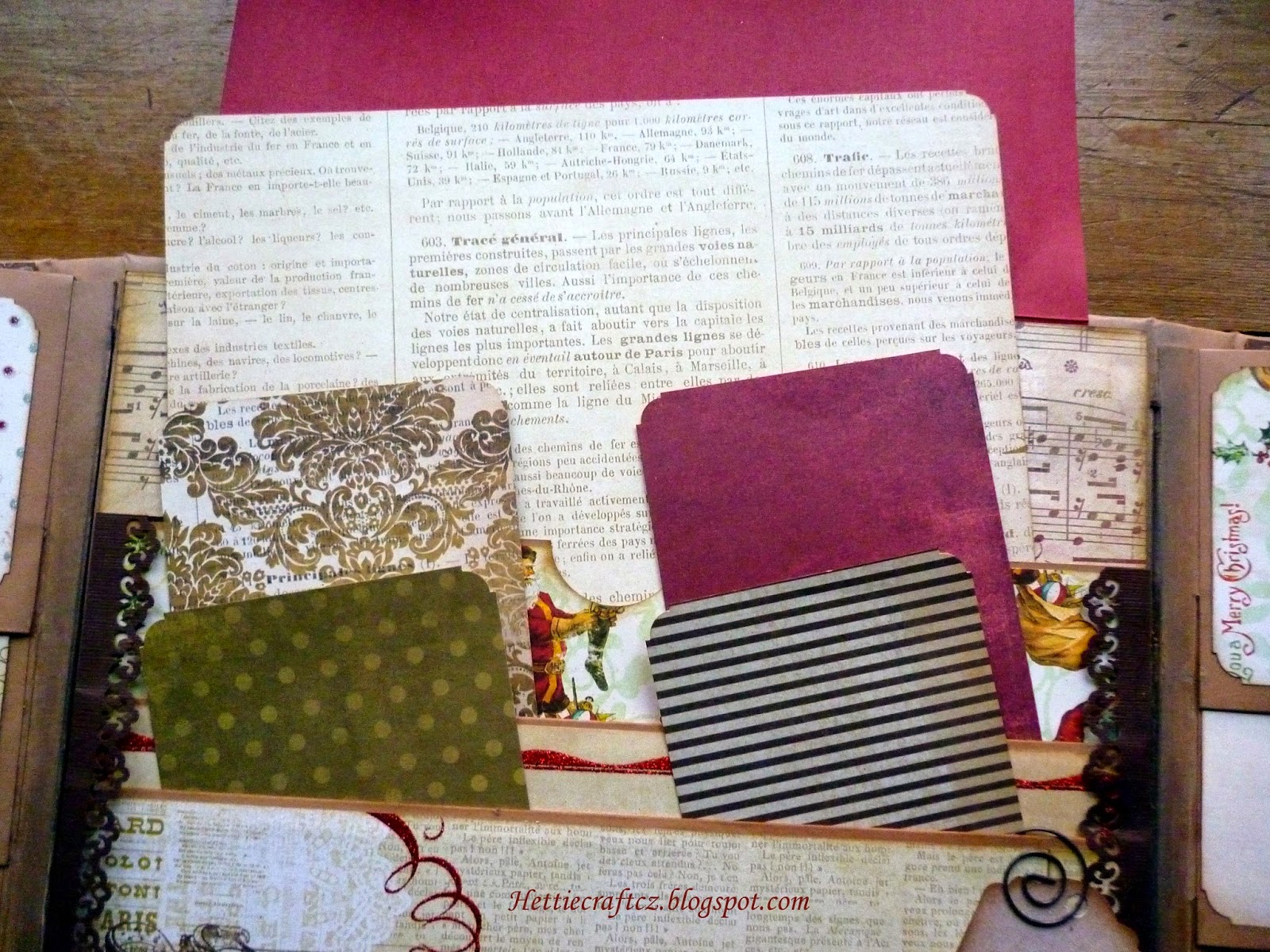 And here is the reverse of the whole album,..I love how shimmery this paper is.  I have also used some Treasure Gold but will add more as I work on this album. 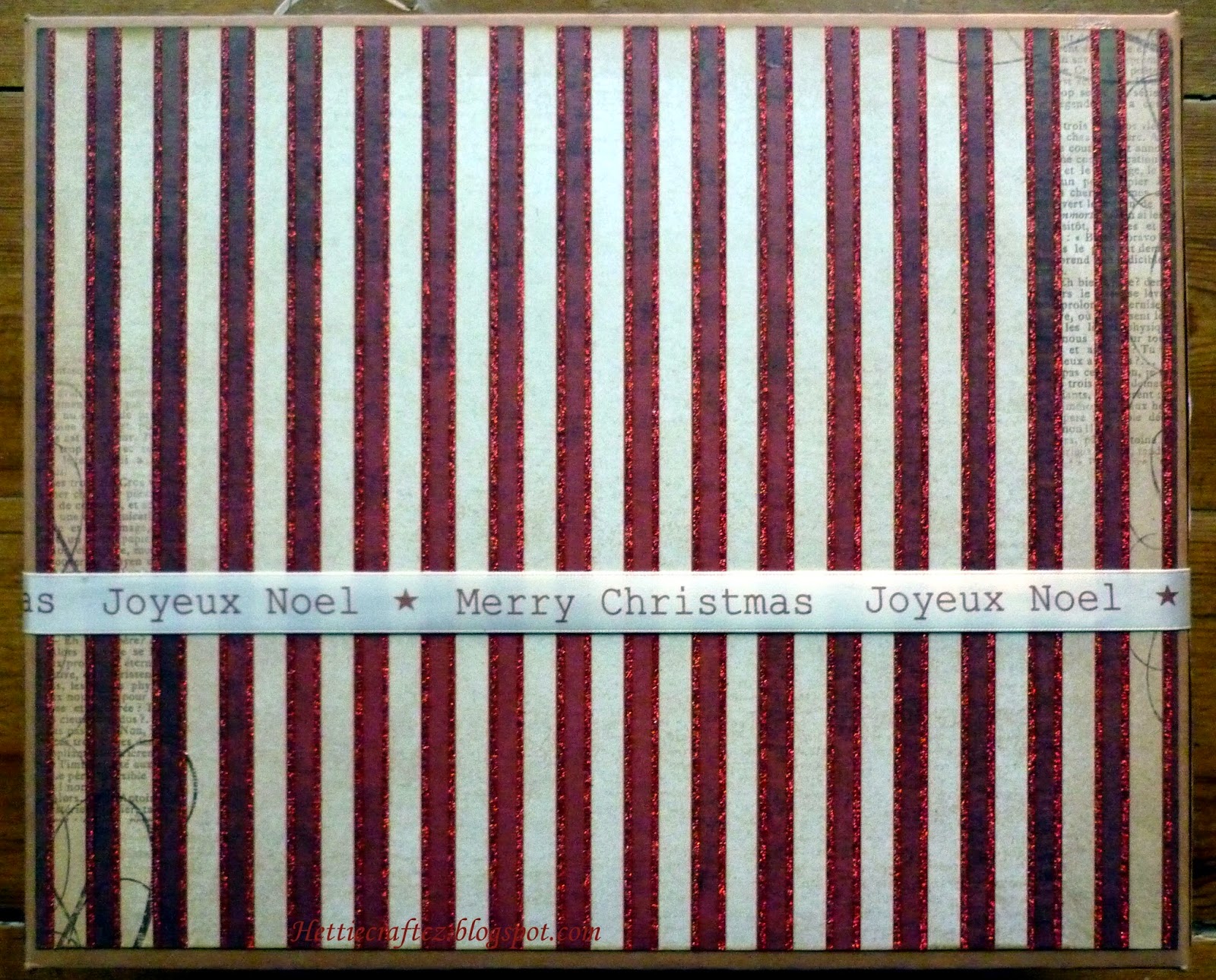 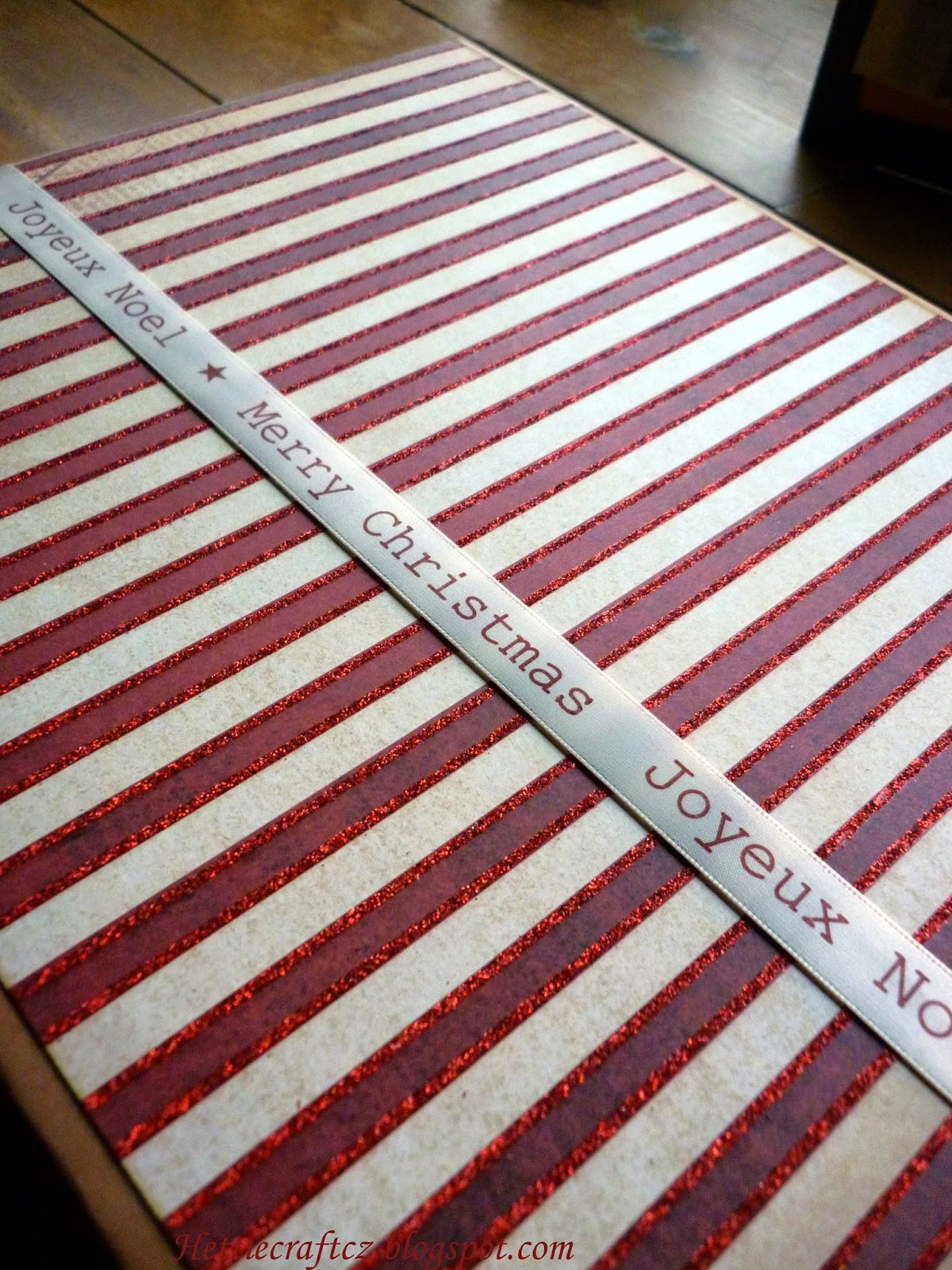 I have used an absolute plethora of papers both new and Snippets from previous years.  I can see some Bo Bunny paper in there too.  Punches used are EK Success (the smaller brown one is NBUS from US), Martha Stewart, Some of the MME paper is from two years ago and was 6x6 paper.  I do like the mix of sizes of the same papers. Corner chomper by We R Memory Keepers.Tan cardstock from The Art Shop and also the chipboard.  The only new thing I bought for this album are the little owl embellishments and the reindeer ones too, which I have not actually used yet, but no doubt will very soon!

Off to share this with the Playground folk as there are a plethora of Snippets used on this album.  I permanently keep a basket of Christmas Snippets so they are easy to find and ready to use.

I thank you for coming over and look forward to reading your comments.

Wonderful wonderful album you have made Hettie, I love everything about it... and am with you in using stuff I already had, I am NOT going to go and buy anything to make this December Daily... just use the mountain of stuff/stash that I have sitting looking at me. Your covers are beyoootiful my dear, love how you embossed the Zutter leather fastener!

Bet that kept you quiet for a while!

You are brilliant! I love how you have made all the flaps and pockets and layers. It really works well. I am just not ready for the 1st Dec! Can I take a rain check?

what a stunning album with all those pockets, lovely to fill as you go along the month, and some fab paper snippits used up as well
Tilly

You never fail to amaze me with your fabulous albums, and wonderful ideas.
Your papers blend so well together and I LOVE all those ittle pockets.
Love, the new blog colours.

Wow - love your Christmas album. How fun to do one for every year. Very cool.

Absolutely lovely, the paper are just up my street and the pages look fabulous.

Having never attempted one of these albums, I am super impressed! (and I probably won't be attempting one either, but I can still enjoying seeing the work somebody else puts into one!! :-) ). Love that closure...it looks like leather. Also love those MME papers...they are stunning on your album. Like the way you've arranged the inside layouts, just waiting for whatever the mood strikes you to journal and add the appropriate embellishments. This is a true labor of love, that can become a family heirloom. TFS

Wahoo Sam - this is just stunning! Soooo much work and the end result is fabulous. I didn't realise that you add something every single day in December - I hope Mrs A and I get a look in :)

I love making mini albums and when I saw yours on the playground I had to visit your blog. Your album is awesome!!! Love the large assortment of papers used. I just signed up as a follower of your blog and I hope you will consider following my blog.

Blooming fantastic! Wish you lived closer then I could come and learn, so very clever Karen x

This is really impressive, Sam! The album is amazing without your memories to dress it up! What a wonderful way to remember the holidays!

Gorgeous album, love the mix of papers & colours and all those fun flaps.
Debs x

Your are on a roll with this beauty. Your December Daily is wonderful/ What fun you will have filling this one.

Love the papers used and loved the bargain you got with the paper and the pack!