Tea on Tuesday...Shhhh! Don't tell Bleubeard I am laTe!!

I hope you are all having a lovely day today.  I am late joining in on Tea on Tuesday with Elizabeth tonight but never mine ey!  I have a special new cup tonight too... 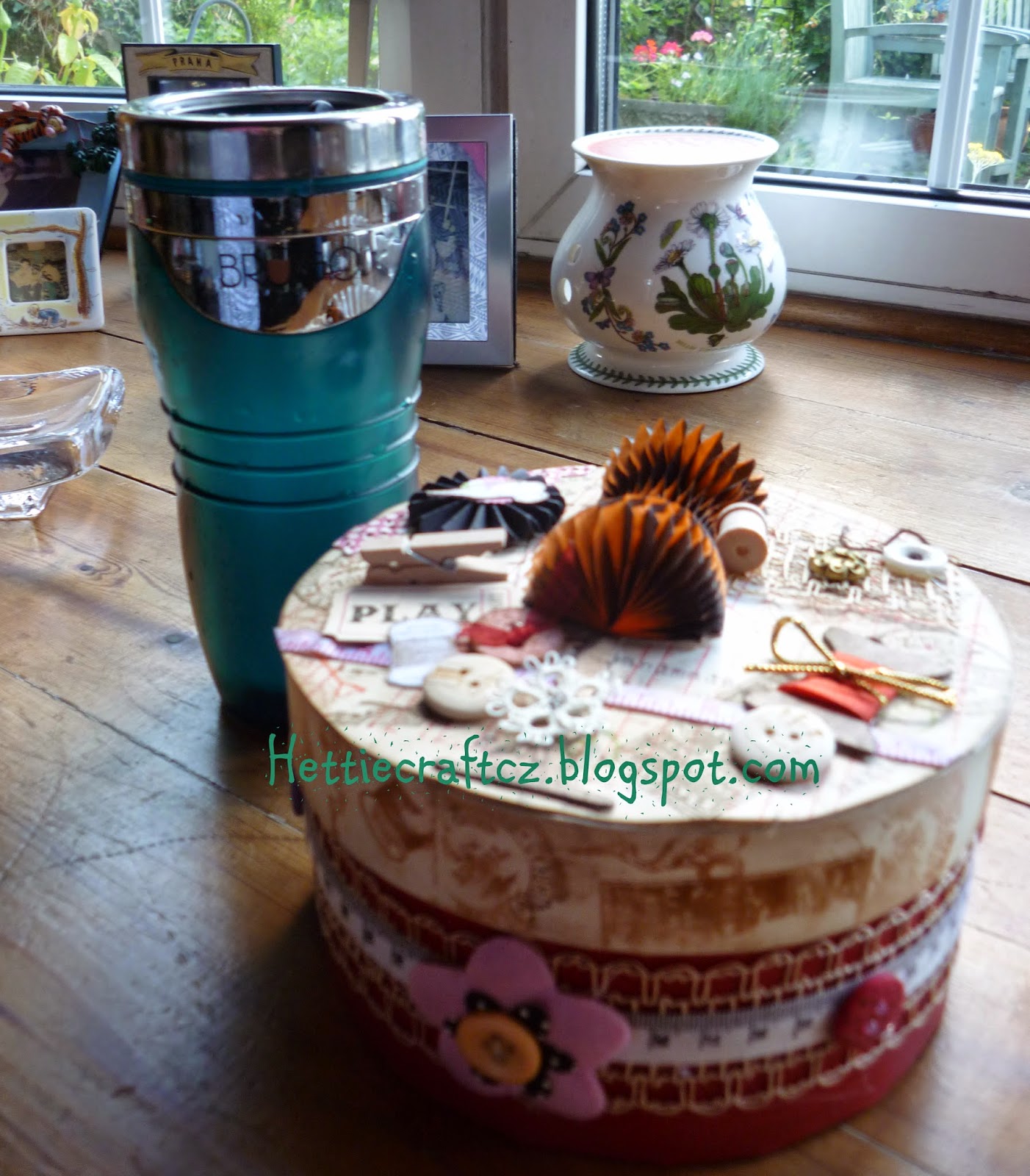 Don't you just love that cup?  I know I do.  It has a "lock" facility on it so that if you knock it over it doesn't spill and also as it has a lid on it I don't get any more of those little squares floating in the top of my tea.  You know exactly what I mean don't you?!! 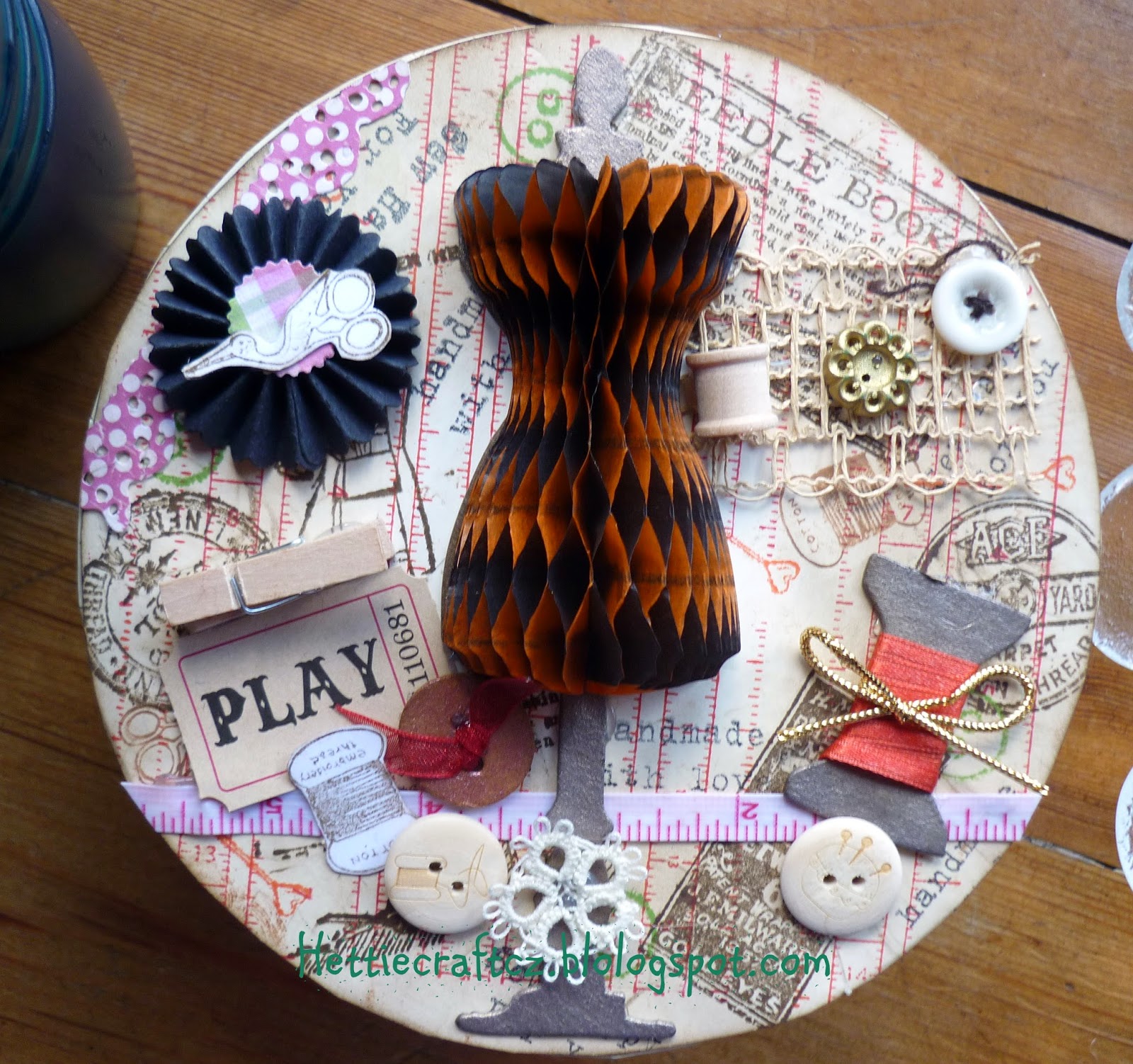 For any of you who have visited my blog round about now in previous years, you will know that I usually make some sort of sewing/quilting gift for our Quilting Group's Annual Summer Lunch.  This year I decided I would upcycle a Christmas gift box which I bought some time ago but have never got round to using (on account that I usually forget where they are at the crucial time!). 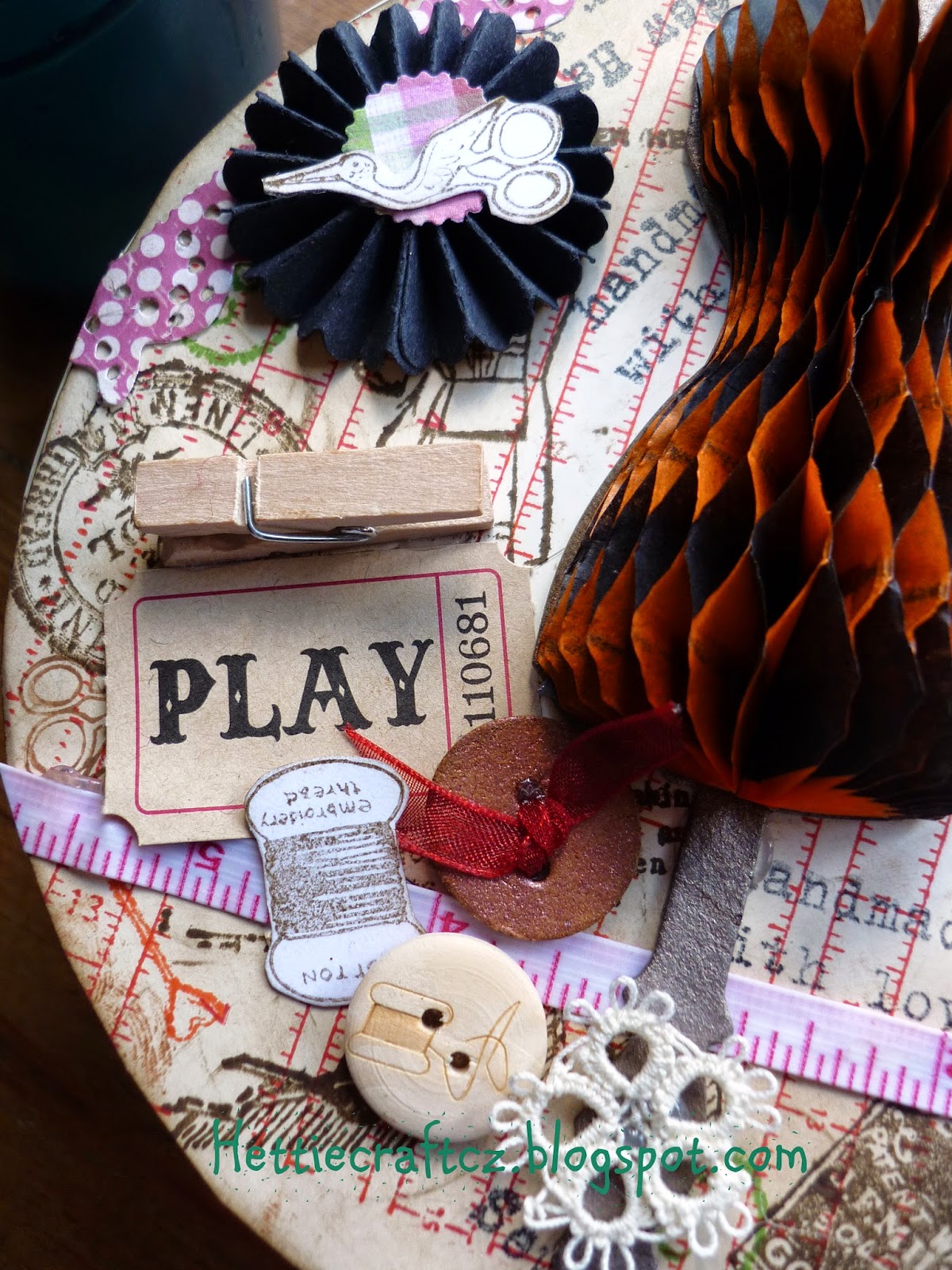 A little close up to show you what I have done.  The mannekin, button and spools are TH die cuts which I used some chipboard from the back of a book, inked with Walnut Stain DI and then smooshed over with Treasure Gold Wax. I die cut some honeycomb and adhered that on to the mannekin.  Whilst that was drying I cut a piece of cream cardstock and stamped it with TH, Papermania, and two unknown stamps (some of them NBUS!).  I then took some Snippets of cream cardstock and inked the tiny scissors and spool stamp that you can see.     I then gathered up some embellies including the Rosette (from the Snippets tin), peg, buttons, tatted lace (my Mum) a bit of lace, an old tape measure, the last snippet of the netting and some buttons.  I just basically fiddled with them until I was happy. 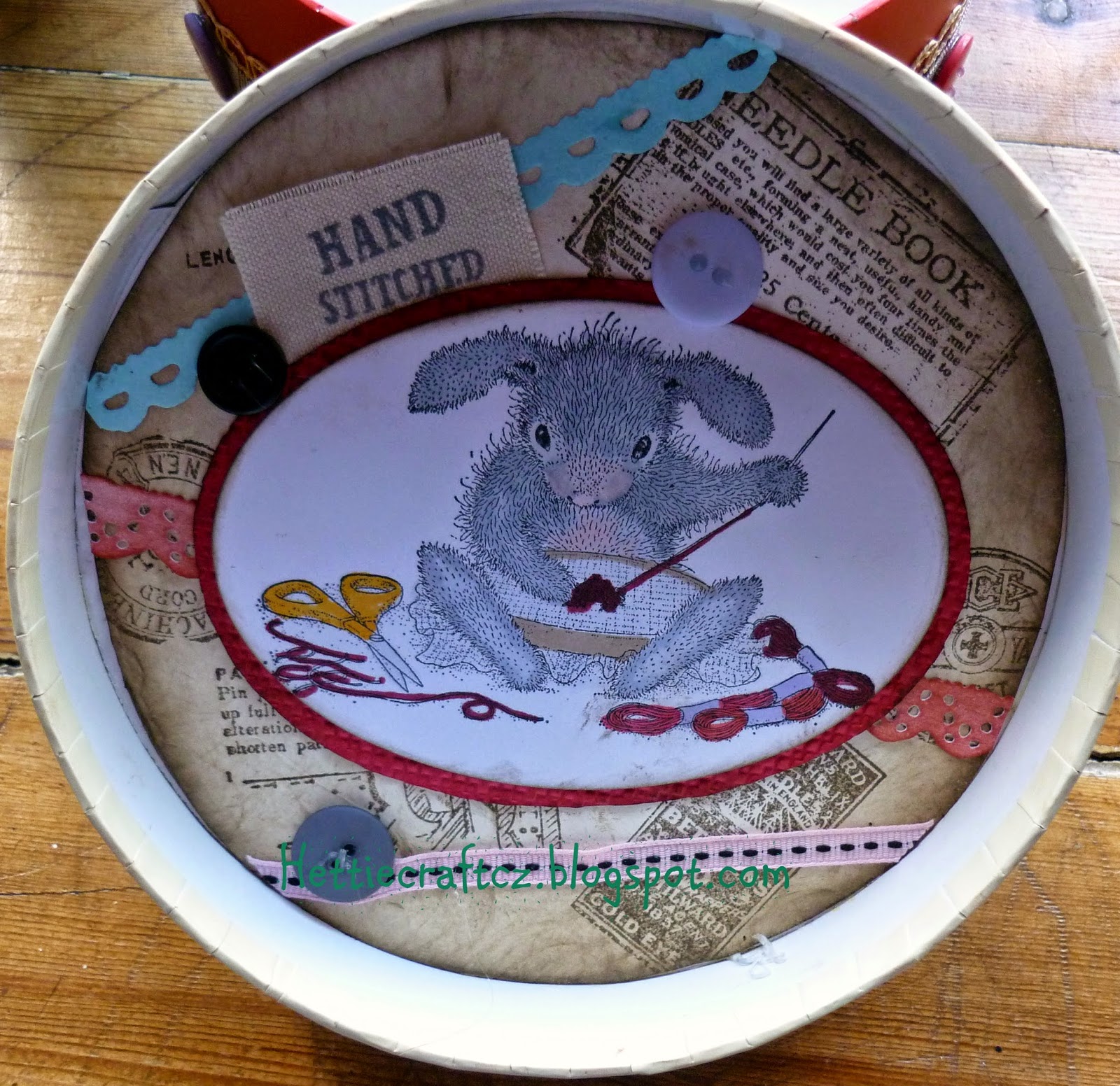 And here is the inside of the lid.  Again I stamped a piece of cream card to make a background and then added a stamping of a House Mouse and some embellies.  The "Hand Stitched" label was from a label on a journal I received at Christmas.  I just tucked it in to hide the word "journal"!  All the paper lace was retrieved from my Snippets tin and all ribbon used other than the tape ribbon round the outside was all from the Snippets basket. 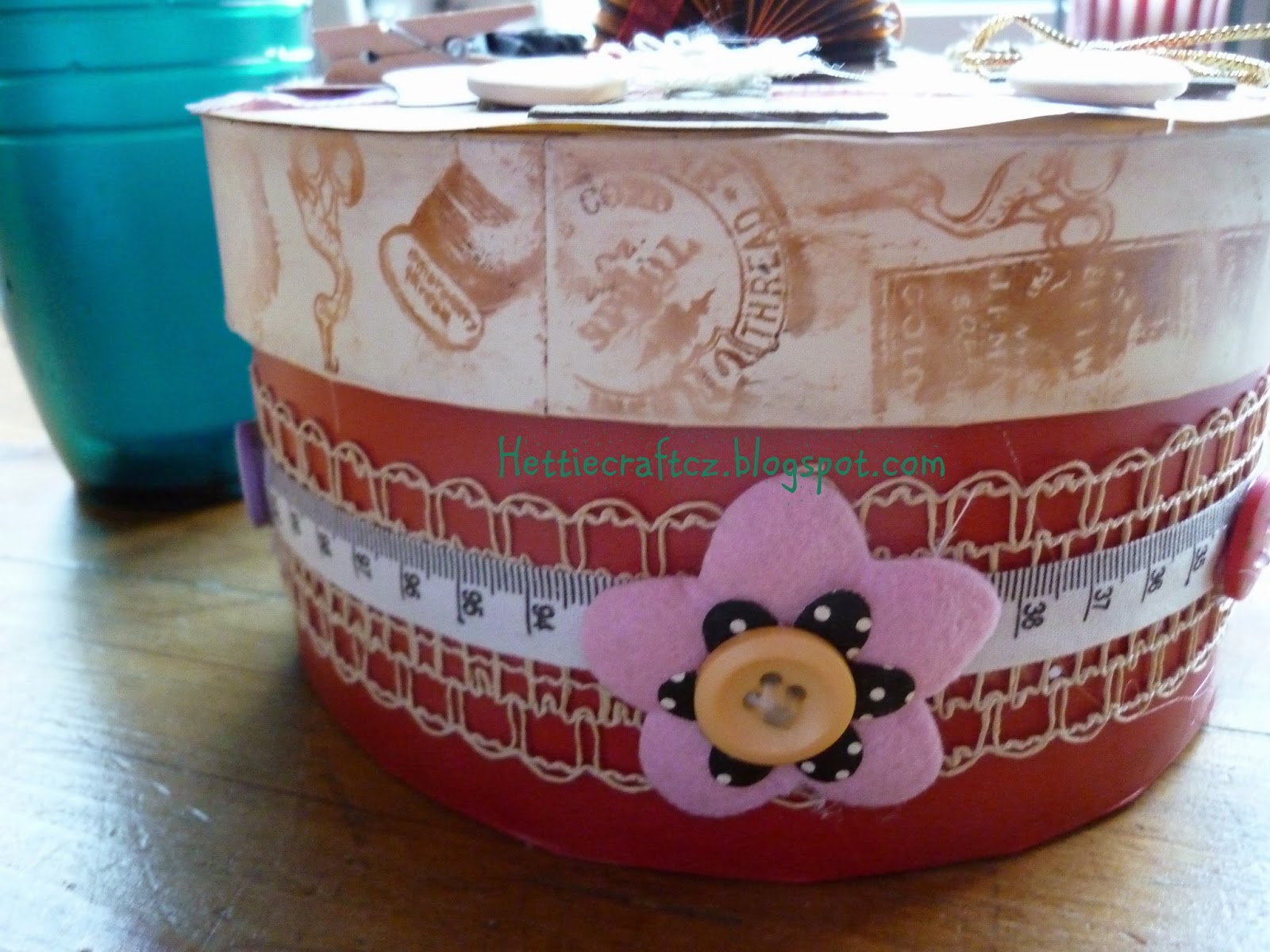 And here is round the outside.  I hate to think how long I have had some of the bits I have used for this box.  Some are VVOS!   I have stamped around the top of the box.  I was a bit worried because the ink wasn't drying particularly quickly and it had smudged and I was thinking of covering it, but actually I like it like that.

Right that is enough waffle from me tonight.  Off to see Elizabeth and the other Tea on Tuesday group to see what is occuring.  I am also taking this down to the Snippets Playground. Not sure I could have made this box without using Snippets!

Edit:  Elizabeth asked us last week to go back to our favourite post. I have chosen THIS one as it was one whereby I shared a glass of vino!  Somehow Elizabeth seemed to know I would be the first to share wine!   It also shares the poem that was written at a journal class I had attended... 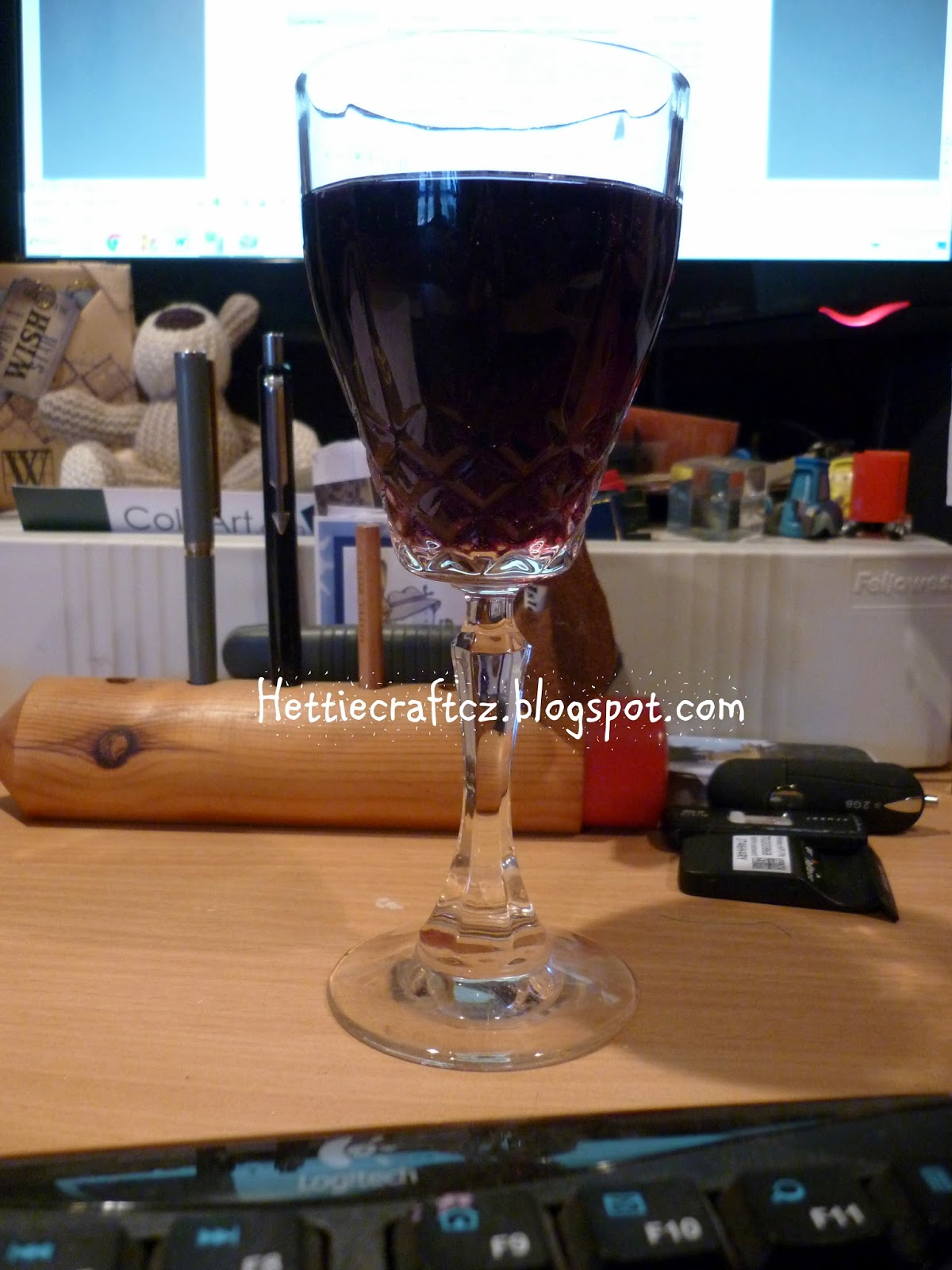 Before I go I just want to say Hi and Thanks to my new followers.  It is lovely to see you.

See ya round and thanks for visiting.

What a great cup that is. It looks sort of futuristic. Your lovely box is quite the opposite and looks rather vintage. I love all the bits and bobs you've added to it.

Yep, I never use a cup in my craft room that doesn't have a lid on it. In fact, I always use a lid on my mugs. You will LOVE this one, because it doesn't spill. Can't say the same for mine.

I'm in TOTAL awe of your gorgeous box. You added a LOT of beautiful ephemera and embellishments to this one. Not sure who will be lucky enough to get this, but it's a true beauty. I was so impressed that you recycled that label, too. You did GOOD!!

Thanks so much for joining us for T on this special anniversary. It was special, too, because that box is a REAL gift/beauty.

It's just about 4pm here in Virginia so your post is perfect for T Hettie!

Your box is lovely and what a sweet surprise with the tailor house mouse inside ;-)

Good idea about a lid on your cup...things can get wild in the throws of creating...

Happy T Day
Here's to continuing fun and sharing...
oxo
p.s. glad you like the idea of my traveling tea cup...we even took it to the UK last year ♥

That gift box is PERFECT for your quilting group! Happy T Day. :)

I'm sure the person who received your altered tin as a gift was delighted. A glass of wine sounds pretty good about now.

It's not even 4 in the afternoon here. Plenty of time to spare :)

The box is great. So many pretty elements.

so many lovely things in this post. Your teacup is wonderful- great way to save from disasters on the table:) Your gift box is just delightful and I love the sweet mouse inside!And the wine, well, I'm not French for nothing -so cheers!

Glad you shared that gorgeous box today. You really filled it with special bits and pieces and decorated the inside lid, too!
Happy T anniversary!

Hello and Happy T Day! I remember that post and loved it then and still do.
WOW, how pretty it came out, love everything.
Thanks for sharing and have a great week.

Fab mug and yes it would stop the little floating pieces of paper!

But your make steals the show. What a wonderful Upcycle for your Quilt group luncheon. You have done such a wonderful job...lots of inkyness, lots of lovely embelliess and then best of all that fabulous House Mouse stitching stamp!!!

Love your box and the cup and that ceramic cup in the background, but that is one huge mouthful dont you think? Lucky it keeps warm hee hee
Bridget #4

Cheers back atcha!
What a wonderful gift to receive!

Your embellished box is brilliant! so lovely...happy T anniversary!

Hope you are having a good week.

An amazing box of tricks there Hettie, I think you missed your calling, you should have been an engineer! I need my homemade socks today as we're about 15F - 20F degrees below normal for a few days! Something to do with that typhoon in Asia affecting our weather patterns, I had the bloody heater on in the car this morning! There's a whole slew of free HP inspired socks on Ravelry, I've decided to challenge myself and make as many as I can, lol!

Thanks for dropping by for T this week.

THAT is the kind of cup I NEED. I have a few that are insulated, but not with a spill proof cap. The CAP is what I need the most....LOL

What a fab invention that cup is! But it doesn't hold a candle to the incredible work of art your repurposed Christmas box is, Sam! You spent a lot of time and care making this gift for your quilting group and it shows in every fabulous detail! I love all the stamping (good job on the NBUS!) and embellies and I agree with you about leaving the smudging. It's super MWAH!! Cheers!! Hugs, Darnell

The box is gorgeous and I love the stamped image on the inside - super cute. I love the honeycomb on the mannequin die! A fabulous and really clever idea Karen xx

Oooh, this is wonderful Sam! LOVE all the embellishements/snippets you used - and how great to see you using your pre-loved House Mouse stamp :)

A lovely post Sam and a gorgeous box. I love your housemouse sitting inside.
Mmm a glass of vino, yes please.
Hugs Lisax

What a brilliant altered box - the top looks just amazing with so many lovely details for the sewing theme. Gorgeous work!
Alison xx

Oooooooh that is bee-oo-tee-full!! The love & patience that went into that piece just shines thru. Anyone would be thrilled to receive this as a gift.
And do many snippets! The die cut honeycomb is genius missus!
And, the house mouse stamp inside the lid made me go 'aaaaaah'
Love it!
Hugs
Debs x