One year, I decided to buy my mother-in-law a cemetery plot as a Christmas gift...

The next year, I didn't buy her a gift.

When she asked me why, I replied,

"Well, you still haven't used the gift I bought you last year!"

My wife and I were watching Who Wants To Be A Millionaire while we were in bed.

I turned to her and said, 'Do you want to have sex?'

I then said,'Is that your final answer?'

She didn't even look at me this time, simply saying,

My wife and I were sitting at a table at her high school reunion, and she kept staring at a drunken man swigging his drink as he sat alone at a nearby table.

"He's my old boyfriend. I understand he took to drinking right after we split up those many years ago, and I hear he hasn't been sober since.

"My God!" I said, "Who would think a person could go on celebrating that long?"

When our lawn mower broke and wouldn't run, my wife kept hinting to me that I should get it fixed. But, somehow I always had something else to take care of first, the shed, the boat, making beer.. Always something more important to me. Finally she thought of a clever way to make her point.

When I arrived home one day, I found her seated in the tall grass, busily snipping away with a tiny pair of sewing scissors. I watched silently for a short time and then went into the house. I was gone only a minute, and when I came out again I handed her a toothbrush. I said, "When you finish cutting the grass, you might as well sweep the driveway."

My wife sat down next to me as I was flipping channels.

My wife was hinting about what she wanted for our upcoming anniversary.

I bought her a bathroom scale.

The woman behind the counter asked me for my driver's License to verify my age.

I looked in my pockets and realized I had left my wallet at home. I told the woman that I was very sorry, but I would have to go home and come back later.

So I opened my shirt revealing my curly silver hair.

She said, 'That silver hair on your chest is proof enough for me' and she processed my Social Security application.

When I got home, I excitedly told my wife about my experience at the Social Security office.

She said, 'You should have dropped your pants. You might have gotten disability too.'

My wife was standing nude, looking in the bedroom mirror.

She was not happy with what she saw and said to me, "I feel horrible; I look old, fat and ugly. I really need you to pay me a compliment.'

I replied, "Your eyesight's damn near perfect."

I rear-ended a  car this morning...the start of a REALLY bad day!

The driver got out of the other car, and he was a DWARF!!

He looked up at me and said 'I am NOT Happy!'

That's how the fight started.


Hope you enjoyed my funnies this morning.  Off to share them with Annie over at Friday Smiles!  Have a great weekend everyone!!

I saw this on facebook earlier and it made me laugh so am sharing  it with you for my Friday Smiles with the lovely Annie....

Having spent my first week in my new job, this just about sums me up!!  My brain feels like it is going to explode with all the new information that has been pushed in there, as well as all the driving!!  But I am in a group with some youngsters and they have kept me smiling all week!so cannot be too bad!

Have a great weekend everyone.

Wedding Card for Alex and Steve...

Just a quickie to share a card I made for friends of mine that got married recently.  We were invited to the wedding, but unfortunately due to the MIL being poorly.  We missed a fabulous day judging by the photographs we saw.  So here is their card... 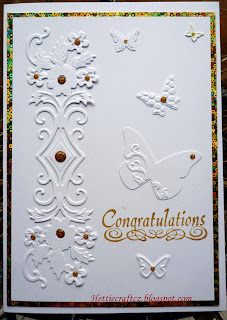 This is the nearest I could get to a white on white card.  I just could not do it...needed some colour even if it was just gold. 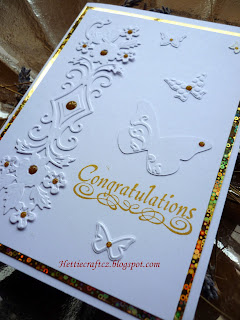 I finally remembered to use my StickIt and die cut a new Spellbinders die as well as my SU flutterbies die.  I added some VOS gold aurora spots that I bought from QVC back in the day.  The stamp is one I always use and I used gold from Delicata.  This really is a beautiful ink and is worth tracking down if you are looking for a gold.  It took me a while to find it.

I mounted this onto some gold holographic card before mounting it onto the card.

I did manage to use some of my Snippets up like a good little smartie so am off to the Snippets Playground to play with the mischievous bunch while Miss is out on teacher training!!!

My lovely friend Mrs A has reminded me that I can join in with the Butterfly Challenge with this card as it has stamping and butterflies on it!!!

Happy Friday everyone.  I have a little change to my usual Friday Funny.  I actually have two photos of yours truly going to bed!! 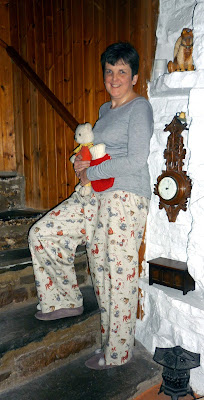 Last Friday I was sat at my sewing machine making the PJ bottoms that you see me wearing.  As I sat there making them, I could not help but think of my Mum and all the happy times we were at quilting workshops, sewing days, lace days and was smiling the whole time.  I emailed our dear friend Annie a picture of the fabric and  told her I was smiling as I was making them and on finishing the PJs on Monday she insisted I shared photos of me wearing them today.  So here I am toddling off up to bed with my Rupert and hot water bottle.  Well it is cold right now!!

Please do enlarge the photo to see the little characters on the fabric.  I bought the fabric in Doughtys in Hereford, purely on a whim as I just knew it would make great PJs!!  I didn't want a matching top so I bought the t-shirt from a store on a well known auction site!!

And now I suppose you want a joke as well.....Here goes!!

A senior citizen drove his brand new Corvette convertible out of the dealership and past MacDonalds. Taking off down the Trans Canada, he floored it to 120 kph, enjoying the wind blowing through what little hair he had left.

"Amazing!" he thought as he flew down the 401, pushing the pedal to the metal even more.  Looking in his rear view mirror, he saw the RCMP behind him, red and blue lights flashing and siren blaring.

"I can get away from him - no problem!" thought the elderly nut case as he floored it to 130 kph, then 140, then 150 kph. Suddenly, he thought, "What on earth am I doing? I'm too old for this nonsense!", pulled over to the side of the road and waited for the Mountie to catch up with him.

Pulling in behind him, the officer walked up to the driver's side of the Corvette, looked at his watch and said, "Sir, my shift ends in 30 minutes. Today is Friday. If you can give me a reason why you were speeding that I've never heard before, I'll let you go."

The man, looking very seriously at the Mountie, said, "Years ago, my
wife ran off with an RCMP officer. I thought you were bringing her back."

"Have a good day, Sir," said the Mountie.

Right then, I hope you like that one.  Thanks to my little friend Kath for this one!!!

Off to join my friend Annie for the usual Friday Smiles!!

Hugs and have a great weekend.

I do hope you are all coping with this terrible weather we are having right now!  I drove down to Cardiff today with my friend (needed to do a reccy on my new place of work - did I tell you I have a new job?, and we popped to Ikea too!!) and the car did have a few scary moments when the wind buffeted it.  In the days when the old rear engined Skodas were the car of choice in our family, my MIL used to carry a bag of coal in the boot on days like this.  I wished I had one in my boot today!!

Anyway, enough chat, I know you wanna see what I have been up to recently!!  This card wasn't done too recently, but it is one I have not shared before.  Hope you like it... 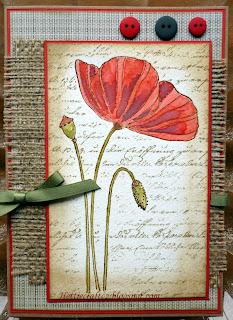 I used my lully Penny Black poppy stamp, inked with Ranger Archival ink and then coloured in using my watercolour pencils.  Then using my TH text stamp, I made a mask of the poppy and then stamped using DI and inked around the image before mounting it onto some red card. 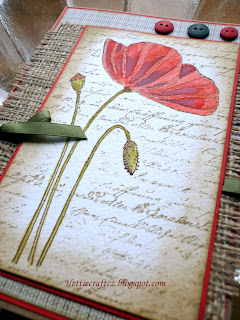 This was then layered onto some left over hessian (or burlap to my US friends),  then some Papermania pp and some more red card before putting it onto the kraft card. 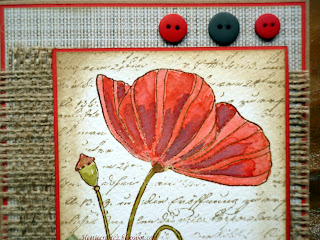 Some buttons along the top and ribbon and hey presto a card was born.

The hessian and red card were from the vast Snippets collection so I am running with my lead boots over to the Snippets Playground ready to take part in the cookery lesson and subsequent pancake race tomorrow!!  There is talk of chocolate spread, but I am an old fashioned gal who likes the lemon juice, currants and sprinkled sugar with cinnamon.  Who is with me?

Off to join in with Annie's Smiles on Friday.   Have a good weekend.
Posted by Hettie at 09:00 22 comments: