This is a story of self-control and marksmanship by a brave, cool-headed woman with a small pistol against a fierce predator.  What is the smallest caliber that you would trust to protect yourself?
A Beretta Jetfire testimonial.... Here is her story in her own words:
"While out walking along the edge of a pond just outside my house in The Villages with my soon to be ex-husband discussing property settlement and other divorce issues, we were surprised by a huge 12-ft. alligator which suddenly emerged from the murky water and began charging us with its large jaws wide open.  She must have been protecting her nest because she was extremely aggressive.  If I had not had my little Beretta Jetfire .25 caliber pistol with me, I would not be here today!"

"Just one shot to my estranged husband's knee cap was all it took.... The 'gator got him easily and I was able to escape by just walking away at a brisk pace.  It's one of the best pistols in my collection!  Plus the amount I saved in lawyer's fees was really incredible."

"His insurance was the big bonus. I’m comfortable now."

I know it has been a while since I have been here but busy busy with working and studying.  Never mind, I am joining in with Annie over at Friday Smiles!!

Have a great weekend everyone.

The old man placed an order for one hamburger,  French fries and a drink .  He unwrapped the plain hamburger and  carefully cut it in half, placing one half in front of his wife.
He then carefully counted out the French fries, dividing them into two piles and neatly placed one pile in front of his wife.He took a sip of the drink, his wife took a sip and then set the cup down between them ,... As he began to eat his few bites of hamburger, the people around them were looking over and whispering. Obviously they were thinking, 'That poor old couple - all they can afford is one meal for the two of them.’
As the man began to eat his fries a young man came to the table and politely offered to buy another meal for the old couple. The old man said, they were just fine - they were used to sharing everything

People closer to the table noticed the little old  lady hadn't eaten a bite. She sat there watching her husband eat and  occasionally taking turns sipping the drink.

Again, the young man came over and begged them to let him buy another meal for them.
This time the old woman said 'No, thank you, we  are used to sharing everything..' Finally, as the old man finished and was wiping  his face neatly with the napkin, the young man again came over to the little old lady who had yet to eat a single bite of food and asked 'What is it you are waiting for?’
She answered


Visit to the Doctors

Those who 'do not' have a perverted sense of humour need to leave now...

A middle-aged woman seemed sheepish as she visited her gynecologist.

'Come now,' coaxed the doctor, you've been seeing me for years. There's nothing you can't tell me.’

'This one's kind of strange…'

'Let me be the judge of that,'The doctor replied

'Well,' she said, 'yesterday I went to the bathroom in the morning and heard a plink-plink-plink in the toilet and when I looked down, the water was full of pennies.

'That afternoon I went to the bathroom again and, plink-plink-plink, there were nickels in the bowl.'

'That night,' she went on, 'I went again, plink-plink-plink, and there were dimes and this morning there were quarters!

You've got to tell me what's wrong with me!' she implored. 'I'm scared out of my wits!'

The gynecologist put a comforting hand on her shoulder. 'There, there, it's nothing to be scared about.

'You're simply going through the change!

Off to share this with Annie for the Friday Smiles.  You have to admit I have made you smile!!

Have a good weekend.  Think of me having to work hard tomorrow.  My first Saturday shift in my new job!!

Long time no hear I know.  I have been such a bad blogger lately but I am hopefully more settled now and hope to get back into the swing of things.

I hope you all had a wonderful Easter weekend and that the Easter Bunny came to visit you.

Something I always try to keep up with is my making cards ready for Christmas and I usually join in with Mo's Rudolph Day.  There is still time and so I am sneaking this one in.  I had started to make it before Christmas but didn't finish it due to circumstances so I am sharing it now.... 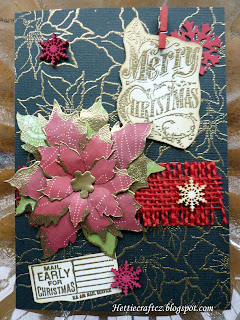 I was making it for the Funkie Junkie Challenge but missed it.  There are so many Snippets in there too so I am taking it to the Playground.  I hear Parsnip was dressed up as an Easter Bunny too and covered in choklit.  I had better take the wet wipes!! 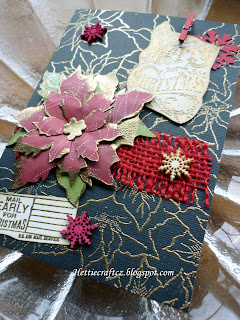 To make the card I first of all stamped the background with versamark and my NBUS Stampendous poinsettia stamp and sprinkled it with gold embossing powder.  I die cut some card snippets with my TH die, inked the edge with versamark and again used gold embossing powder along the edges.  I used some hessian ribbon across the card, stamped a "label" sentiment and tag before adding some snowflakes both wooden and paper. 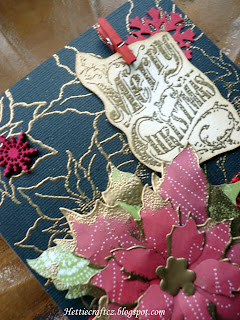 A peg to hold the label on and hey presto card was finished ready for sending.

Thanks for calling by.  I hope to visit you all very soon.

Late Night Phone Call To The Vet
A dog lover, whose dog was a female and in heat, agreed to look after her neighbours' male dog while the neighbours were on holiday
She had a large house and believed that she could keep the two dogs apart.
However, as she was drifting off to sleep she heard awful howling and moaning sounds, rushed downstairs and found the dogs locked together in obvious pain and unable to disengage, as so frequently happens when dogs mate.
Unable to separate them, and perplexed as to what to do next, although it was late, she called the vet,  who answered in a very grumpy voice.

After she explained the problem to him, the vet said, "Hang up the phone and place it down alongside the dogs.
I will then call you back and the noise of the ringing will make the male lose his erection and he will be able to withdraw.”

"Do you think that will work?" she asked.

"It just worked for me,” he replied.

Off to share this with Annie for her Friday Smiles.

Sorry I have not been around much lately, but starting my new job and a course recently I have been running around like a B A F!!!  I hope things have settled a little lately and will soon be back to my usual self!!

One year, I decided to buy my mother-in-law a cemetery plot as a Christmas gift...

The next year, I didn't buy her a gift.

When she asked me why, I replied,

"Well, you still haven't used the gift I bought you last year!"

My wife and I were watching Who Wants To Be A Millionaire while we were in bed.

I turned to her and said, 'Do you want to have sex?'

I then said,'Is that your final answer?'

She didn't even look at me this time, simply saying,

My wife and I were sitting at a table at her high school reunion, and she kept staring at a drunken man swigging his drink as he sat alone at a nearby table.

"He's my old boyfriend. I understand he took to drinking right after we split up those many years ago, and I hear he hasn't been sober since.

"My God!" I said, "Who would think a person could go on celebrating that long?"

When our lawn mower broke and wouldn't run, my wife kept hinting to me that I should get it fixed. But, somehow I always had something else to take care of first, the shed, the boat, making beer.. Always something more important to me. Finally she thought of a clever way to make her point.

When I arrived home one day, I found her seated in the tall grass, busily snipping away with a tiny pair of sewing scissors. I watched silently for a short time and then went into the house. I was gone only a minute, and when I came out again I handed her a toothbrush. I said, "When you finish cutting the grass, you might as well sweep the driveway."

My wife sat down next to me as I was flipping channels.

My wife was hinting about what she wanted for our upcoming anniversary.

I bought her a bathroom scale.

The woman behind the counter asked me for my driver's License to verify my age.

I looked in my pockets and realized I had left my wallet at home. I told the woman that I was very sorry, but I would have to go home and come back later.

So I opened my shirt revealing my curly silver hair.

She said, 'That silver hair on your chest is proof enough for me' and she processed my Social Security application.

When I got home, I excitedly told my wife about my experience at the Social Security office.

She said, 'You should have dropped your pants. You might have gotten disability too.'

My wife was standing nude, looking in the bedroom mirror.

She was not happy with what she saw and said to me, "I feel horrible; I look old, fat and ugly. I really need you to pay me a compliment.'

I replied, "Your eyesight's damn near perfect."

I rear-ended a  car this morning...the start of a REALLY bad day!

The driver got out of the other car, and he was a DWARF!!

He looked up at me and said 'I am NOT Happy!'

That's how the fight started.


Hope you enjoyed my funnies this morning.  Off to share them with Annie over at Friday Smiles!  Have a great weekend everyone!!