A man was dining alone in a fancy restaurant and there was a gorgeous redhead sitting at the
next table..He had been checking her out since he sat down, but lacked the nerve to talk with her.
Suddenly she sneezed, and her glass eye came flying out of its socket towards the man. He reflexively reached out, grabbed it out of the air, and handed it back.

'Oh my, I am so sorry,' the woman said, as she popped her eye back in place. 'Let me buy your dinner to make it up to you.'
They enjoyed a wonderful dinner together, and afterwards they went to the theatre followed by
drinks... They talked, they laughed, she shared her deepest dreams and he shared his. She listened to him with interest.
After paying for everything, she asked him if he would like to come to her place for a nightcap and stay for breakfast. They had a wonderful, wonderful time..
The next morning, she cooked a gourmet meal with all the trimmings. The guy was amazed. Everything had been so incredible!
'You know,' he said, 'you are the perfect woman.. Are you this nice to every guy you meet?'

The  suspense is killing you, isn't it?

'You just happened to catch my eye.'

(Oh shut up, and just forward it!)
Sharing this with Annie for our regular Friday Smiles!!
Posted by Hettie at 08:00 18 comments:

Yep I am joining in with the WOYWW capers this week as it is half term and so I have no dancing to teach tonight.  Yippeeee!!  And this Saturday is the Halloween Crop too.  Anyone coming?

So who wants to see my mess err I mean Desk?  Look away now if you don't like messy desks....

You have been warned.... 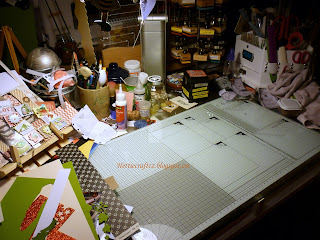 I had just finished off my C Card for Rudolph Day..... 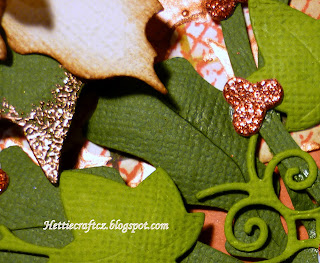 If you want to see more of it you will have to call back tomorrow!!


Now you know what to do. Sign in the visitor's book by leaving a comment and then go HERE to see lots of other mad crafters who have shared their desk for all to see.

I have been doing some uploading of my photographs that were on my camera and came across lots of things I have not yet blogged - oops!!

So I thought I should shift my little butt (in my dreams!) and share them with you.

Here is a card I made for the Queen of Snippets - Miss Di, for her birthday which was last month!! 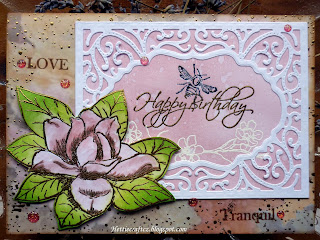 I remembered I had some Chinese backing papers which I had bought a VERY long time ago, but was keeping for "best".  So I dug them out and having cut it to size (5x7) I inked it up with my splatter stamp around the edge and embossed it with gold embossing powder.  I also then added some words to express the moment.

I then took a piece of white card and  I stamped with Versamark ink with a new flowery stamp and embossed with white embossing powder before inking the whole piece with Victorian Velvet and Tattered Rose DIs, I then used my favourite spritz n flick technique and stamped the sentiment and bee (NBUS - Graphic 45). 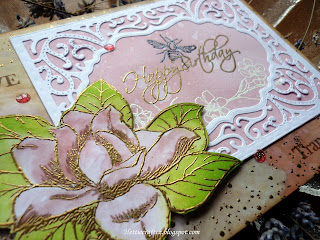 I took my NBUS Lily Stamp from Sheena Douglass (well over a year old!) and stamped it up with Versamark and embossed it with gold embossing powder.  Once it was dry I then painted with DIs to colour it all in, fuzzy cut it out and ten using my pokey-things-with-balls-on-to-3D it and make some texture. You know what I mean!  I cut out the die (it was new when I did it). 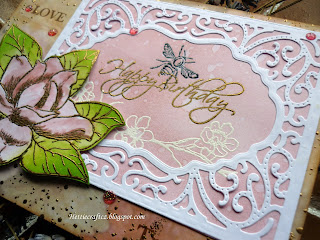 Then all I had to do was layer it up and get it into the post for my friend.

As I had all the stuff out, I set about making another to go in my box for future use, which actually wasn't long. 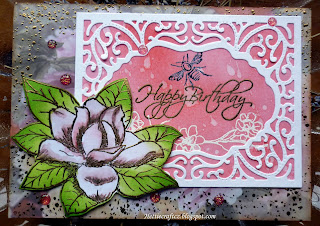 This time I used the Abandoned Coral ink.  Isn't it lovely? 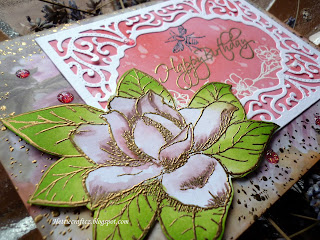 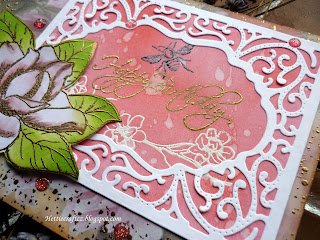 I am going to link this up with Mrs Snippets herself so I shall see you all at the Snippets Playground.  Does anyone know if the ice-cream man is coming round still, or has he packed it all away until next year?

In Dublin this morning at a busy city centre bus stop, a lovely young woman, wearing a very tight mini skirt, joined the queue waiting for a bus. When a bus stopped & it was her turn to get on, she found that her new skirt was too tight to allow her leg to come up to the height of that first step of the bus.

Slightly embarrassed & with a quick rather self-conscious smile to the bus driver, she reached behind herself to unzip her skirt a little, thinking that this would give her enough slack to raise her leg & then once again, she tried to mount the bus step only to discover she still couldn't.

So, now a little more embarrassed, she very quickly once again reached behind her to unzip her skirt a bit more, & for a second time attempted to get up onto the bus. BUT found, yet again, much to her dismay, she couldn't raise her leg high enough. Flashing a little smile to the driver, she quickly reached behind for a third time to unzip it even more but unfortunately she still was unable to make the step.

BUT this time, a big burly Kerry man who was standing behind, grabbed her round the waist, picked her up easily & swung her gently up onto the bus.

Ohh . . but she went ballistic. . Immediately she turned on the “would-be Samaritan” yelling, "How dare you grab hold o’ me, like that! I don't even know who you are!"

The Kerry man smiled and drawled, "Well, ma'am, normally I would agree with you, but after you unzipped my fly three times, I kinda thought we were friends!"
Linking this with my friend Annie for Friday Smiles!!! Have a great weekend 😃
Posted by Hettie at 08:00 15 comments:

This morning I was sitting on a bench next to a homeless man, I asked him how he ended up this way.

LET’S GO ROB A BANK.  Life in jail sounds OK to me.


Tee Hee!!!!  Off to join Annie with Friday Smiles.  Have a good weekend everyone!!

How are we all doing?  I hope you have not been washed away with all this rain we have had in the last two days.  My wellies are wearing out and I will need to ask Santa for a new pair for Christmas!

I wanted to show you a card I made for my niece recently for her birthday.  As you can tell from the photos it was a beautiful sunny morning when I took the photos before handing it to my sister for when she returned home from Geneva..... 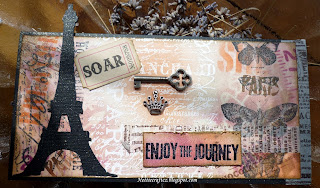 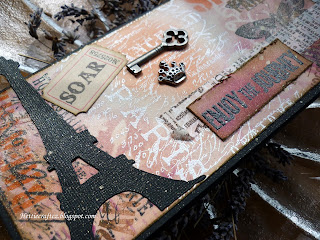 The Eiffel Tower is a new die which I bought some time ago in a sale.. 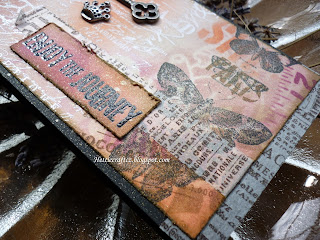 I inked up a Snippet to make the sentiment here... 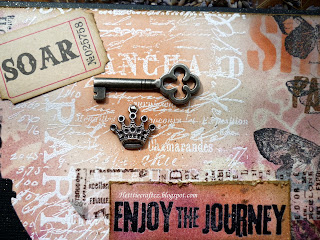 Aren't these embellies gorgeous?  The key is a Kaisercraft one which again was NBUS bought for me as a birthday pressie - MWAH - you know who you are....

The lower one is a TH embellie bought eons ago! 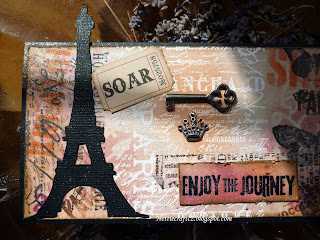 And of course I needed an envelope that would take the tower... 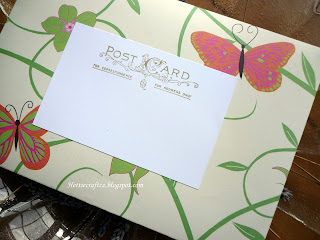 ......courtesy of my We R Memory Keepers board.

Off to join in the fun in the Snippets Playground.  Got me souwester on and my wellies...who wants to come puddle jumping with me?

Hello
I had a smiley moment this week that I wanted to share with you instead of my Friday Funny.... 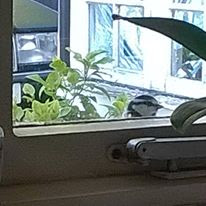 I recently bought a new birdie feeder to go outside the kitchen window as the old one had broken earlier this year.  As a result we are getting visitors and this particular one kept pecking at the window.  When I grabbed the phone he did not fly away and let me take his picture.
Off to share this with my mate Annie for Friday Smiles as this little one certainly made me smile!!
Hettie
xxxx
Posted by Hettie at 08:00 17 comments: